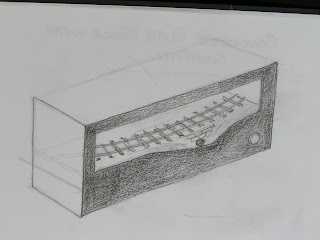 As the Industrial Narrow Gauge Adventure progresses, I have started to think about the type of layout I would like to build. In an ideal world, it would be huge, stretching from one end of the double garage to the order with run round loops and rolling countryside plus an industrial setting to one end. This plan although impressive would never get finished, so I am restricting myself to a smaller 'shelf style' layout a layout more akin to a working diorama.

My first doodling (see above) is a simple box and a single track running across a culvert. Simple and effective with loads of diorama potential but boring! 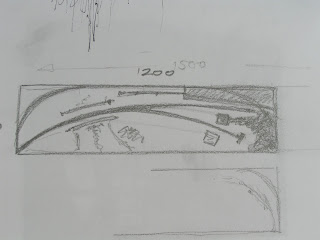 Mk II is a little more impressive with just one turnout and a curved back scene. 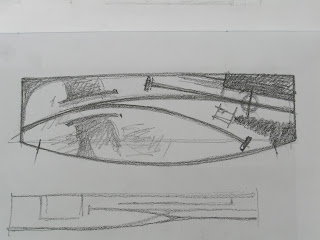 Mk III and the factory unit to the right becomes more prominent. 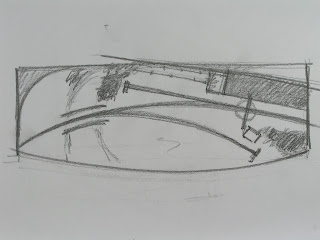 Mk IV Developing the theme even further with a curved front and a turntable. 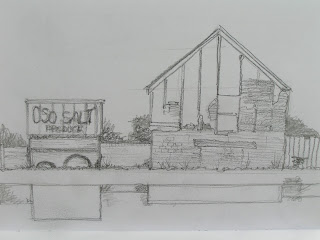 Mk V I have been given a couple of old kitchen cabinet doors - 700 long and 300 wide. These would be ideal as baseboard and backdrop, so a flat back and just a single track running from left to right.

I know that this would be too simplistic, but it would allow for super detailing of the back scene. 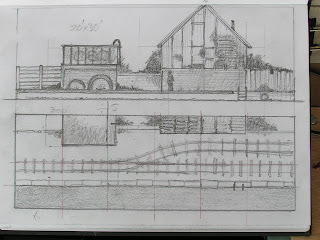 Mk VI By extending the doors to 900 x 300 I could build this layout. A layout with just one turnout and a canal side running along the front.

I have found a third kitchen cabinet door which has already been cut in half and the shelf layout is now 900 long by 300 deep with a similar solid backdrop. Expect some first attempt images soon.

Just saw this post as I was trawling a Blog list on another Blog. I have a little bit of narrow gauge stuff that I have had for a few years with out much idea of what to do with it. I believe the figure I have is G gauge. Your green plastic card engine is good, and has given me some idea's.
Cheers.
Neil.

Looks interesting, just make sure that lead is long enough!