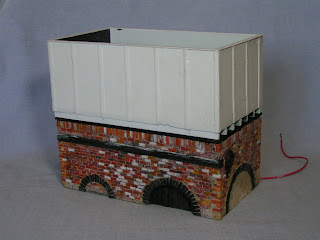 With the red brick base now finished (see earlier posts), I have started work on the metal salt pan. I have used the Lion Salt Works as inspiration, but the depth (front to back) has been shortened to fit in with my planned shelf layout. 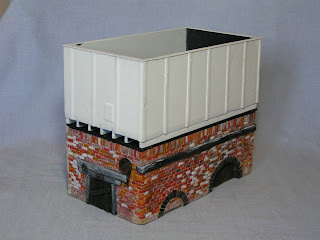 I used a small metal cog on a scratch-built handle to emboss the lines of rivets, then cut the thinner plastic card into strips and glued them in place with superglue. The slightly thicker rim to the top was also produced from plastic card and was modelled to produce a slight overhang, hiding the fact that the sides are in fact too thick.

Note how I have distressed the metal sides by gouging with the bit of a Dremel or trimming with the point of a scalpel. Once the superglue had fully set, I 'washed' the plastic card with liquid poly to 'soften' the effect. 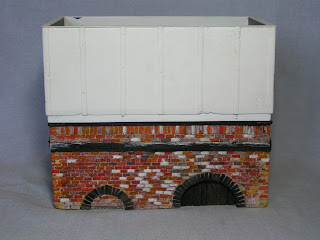 In this final image, you can see how I have added a 'make-do' repair (something that was once again copied from the Lion Salt Works pan). The wooden beams (under the metal pan that hold the metal salt pan in place) were modelled from 3mm thick plastic card strips and textured with the teeth of a razorsaw before being glued in place with more superglue. 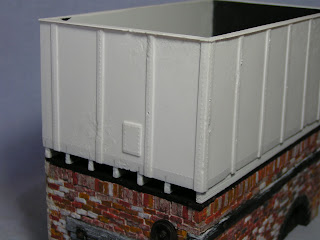 Prior to taking these photographs, I have further textured the flat metal sides by adding some acrylic gel and very fine sand to show some surface rust.

It is nothing spectacular, simply an industrial terrain feature, but you make it so interesting! I really admire the effort you put into that salt pan. It will be a pleasure to see how that shelf layout is developing.
Thanks for the good show!