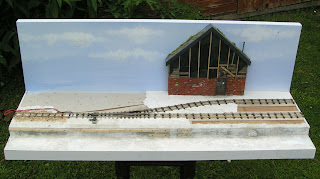 It's been some time since I posted updates on the OSO SALT layout. I had allowed the whole project to stagnate due to some work and commission issues but hopefully the visit to the 7mm Narrow Gauge Association Railway Show earlier this month will give me the push to continue working on the layout.

I have decided that the 'Y' style layout will have to go as the area in front of the main building (particularly in front of the factory door) does not allow for larger engines and wagons to pass by. In addition the turnout lever that I had planned to use (front left) was broken during a ham-fisted move.

I had hoped that I could get a narrow gauge magazine interested in publishing work-in-progress articles, but after e-mailing a number of publications (a number of times) I have received no response!

My plan is to keep a record of the work on this Blog - updating on a regular basis to show how I have changed the initial plan and the modelling work I have carried out.