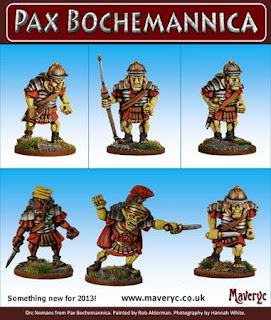 Way back in June 2015 I dedicated a whole month of blogging to one of my favourite games - Pax Bochemannica from Maveryc Games. For more details see this link. Well I'm going to do the same again.....

During August 2020, I'll be posting images and details of some of the Pax Boche models I have dragged from my Lead Mountain and painted-up.

I should start by giving some details as to what Pax Bochemannica is!

Pax Bochemannic or Pax Boche or S.P.Q.Orc is a skirmish wargame that pits the all conquering Nomans (Orc Roman Legionnaires) against some unruly Halflings (Celtic barbarians or halfling football hooligans) or Boche in the furthest northern edge of the known world. The box set contains 6 Nomans Orcs and 14 Halfling Boche plus an illustrated rule book, dice and tokens. I was lucky enough to be involved in the initial play testing - actually building some terrain pieces for use in play testing and picked up the initial box set when it was originally launched back in 2015. I painted up most of the Boche straight away and even modelled some of the official resin gaming pieces, but the Noman Legionaries have remained un-painted up in the attic ever since.

Pax Bochemannica and the associated miniatures can be found on various sites (Ebay for example), but I'm not sure if there is an official or licenced supplier/retailer.