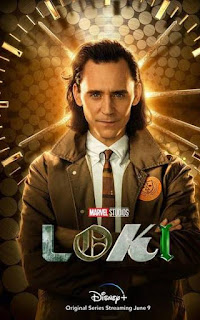 Sue and I have just finished Loki - the new Marvel series featured on the Disney channel and although we thought it OK, it didn't quite hit the mark. Although.....

Sue commented that she didn't like it as it was a little too much like Doctor Who. At first I couldn't see the connection, but as the series continued I couldn't help thinking that the BBC should be looking at suing both Marvel and Disney for character rights infringements.

Loki has different reincarnations of himself (even a female version) just like Dr. Who .

Loki flits around in time and space, just like Dr. Who.

Loki has companions, I think Owen Wilson makes a great companion to Loki - just like those on Dr. Who.

Then there are the Time Keepers - sound familiar? Dr. Who has the Time Lords

The more I watched, the more I thought that this is the new Doctor Who. Actually a better version of Dr. Who and although the first series was a little too complicated for it's own good, I do think it was better written than the newer Jodie Whittaker Dr. Who series. I hope that it continues and we see even more Dr. Who references. I'm sure Marvel will do a better job than the BBC have done with the recent franchise/series.

Now that you mention it. Yeah its a lot like Dr. Who.