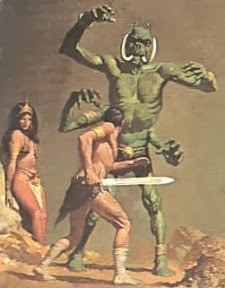 Last night I watched the Disney film, John Carter of Mars. After hearing so many poor reviews, both Sue and I were pleasantly surprised and actually though it was quite good.

I think this maybe one of those occasions where the critics were out to close a good film even before it had aired. My only criticism (and it is only a small one) was that I thought the introduction (Earth side) a little slow, once the action started on Barsoom we were caught up in the story.

I particularly liked the typical Disneyfication of the pet...... what-ever-it-is (Woola) and I actually laughed out loud on a couple of occasions. No doubt the poor box office takings will mean that a second John Carter or Barsoom film is very unlikely, but I would say that without being a great film, it was a good evenings entertainment.

Having been a fan of some of the comic book Barsoom tales, I think there was an argument for less clothes and (as famously stated on TMP) more boobies!

More info. can be found here.

I recently saw that the film has topped the video sales lists: http://disneyvault.net/what-failure-john-carter-tops-home-video-sales/

So not such a failure after all.

No idea why this met with such acrimony in the press and why it didn't do better in theatres.

Maybe its because it wasn't based on a comic book :(

Totaly agree, I thoroughly enjoyed the movie and really don't understand why there was so much negativity surrounding it.

I missed it at the big screen but caught it on DVD. I think that's quite a decent film. Well I enjoyed it. John Carter is a massively underrated flick.

Have a look at my own blog, I did a review of it a year ago where I summed it up. Seems I was right about it.

I had read this when you first posted it. I think there were also other Bloggers who had similar views.

Hard to believe that it crashed at the Box Office but good to know that it is now performing well.

I liked it too. It was very odd how the press turned on it instantly. Good to see it doing well on DVD.

Part of the crash was deliberate. Apparently, between signing on for the project and release of the film, Disney had a major turnover of personnel. John Carter of Mars was the last film of the old guard. The new guys wanted it to flop so that their first projects would look better in comparison, or some such. So, little advertising, no toys, no fast food merchandising, nothing.

it was a good movie. made sense all the way through. not too gorily violent and no sex scenes. i thought that it was the sort of movie you could watch with teenage kids and not feel wierd.

I liked it well enough and have it on DVD. I think people should get it round their minds that movies made after a book are just that: adaptations and not necessarily a precise visualisation of said book. Same is true for the Hobbit for instance. This movie had prompted me and some friends to start a Barsoom miniatures project with minis from Bronze Age and Tin Man.

Thank you for all the replies and great comments.

Perhaps this will lead to a cable series spin off. I just watched some Spartacus last night. More genitalia than you can shake a stick at.