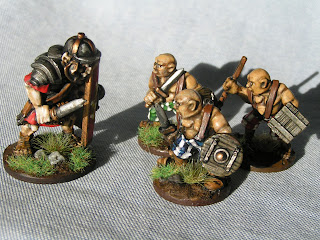 Craig Andrews over on Orcs in the Webbe has just uploaded the first of three SPQOrc - Pax Bochemannica scenarios called Parley Vous Boche? Which was written by me. For full details and a direct link to the story/scenario go to this link.

The three stories and gaming scenarios were written some time ago, when the game Pax Bochemannica was first released, some personal issues with Maveryc Games have meant that development on the game (a great skirmish game by the way) was suspended. Miniatures and rules are now available from Miniature Figurines - see this link for details.

This story and gaming scenario was written as an unofficial gaming supplement, and to introduce a couple of Boche characters, who should be instantly recognisable to anyone of a certain age and with memories of a yellow Reliant three wheeler speeding around Peckham!

I'd be interested in comments as to what you think of this scenario, not just because I wrote it, but to see if there is still some interest in this great game. Cushty.....

I found it a good scenario and I am glad I now had a chance to read it.

The rules were very familiar to me as well.

Very interesting scenario. I could see using something like this. Thanks for sharing.

I'll be playing this one for sure!

Those are really cool figs.

Shame the about the rules.

Glad to see your work is available!