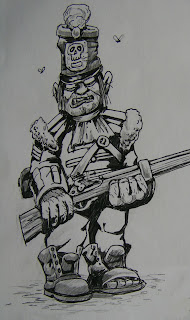 
After a night of drinking and debauchery and a race across the countryside avoiding local bandits and vicious Ogre provosts Freddy must now sneak back into the Albion Orc camp before they find out he's been out on the razzle in the local town of Burrow Port...
Will he find what he has lost and make it back to camp in time for roll call?
-
You can find the first scenario of this campaign here, and the second here.
-
In case you missed them:
In the first scenario of the Scours, Speeds and Sneaks mini-campaign, Freddy had to search the town of Burrow Port looking for his commander's beloved horse and the regimental Busby, having lost both of them the night before in a drink fuelled haze...
In the second scenario, Freddy had to race across the countryside past local bandits and the ever vigilante Provosts to get back to camp before Roll Call....
I give you the conclusion of "Scours, Speeds and Sneaks"...
Campaign Objective Update
Having searched Burrow Port and high-tailed it through the forest Freddy now has to get Sheer Guard (if he has him) back into the stables, the Busby (if he has it) back on the regimental standard and back to his tent to deposit any remaining loot (if he has any) all before roll call at 12 noon.
Any loot Freddy found in the first scenario (and didn't throw away as distractions in the second) can be used in this scenario, see the 'Being Spotted!' section below.
Don't forget that roll call takes place 30 turns after the campaign begins so be sure to keep track of how many turns go by in this scenario, adding them onto the total from the first two.
Notes on Playing this Scenario
The scenario below only takes about an hour to play through. Don’t forget that Freddy is still against the clock. The scenario plays well either solitaire or with someone controlling the Orcs in the camp. As with any of Freddy’s tales of adventure, the re-telling of each tale washed down with rotgut brandy by a roaring fire leads to different endings. Who knows if the one in which you control Freddy for is the real story or just a variation on the original?
Introduction
Bo****ks! It wasn't looking good. Barely any bl***y time to get the bl***y horse and bl***dy hat back to where they should be let alone get back to his bl***dy tent before they blow the bl***dy roll call horn. Ah well, tighter scrapes than this had not ensnared Freddy and his light footed step. Time to put all that bl***dy practice sneaking around to good bl***y use.
Map and Set Up
The table should be setup to represent an Albion Army encampment and the woods surrounding it. A selection of small and large tents should be arranged on the table top so they make a believable looking army camp covering roughly 72cm x 72cm in the centre of the table surrounded by trees. Then you must place Freddy’s three objectives on the table top as well. These should be placed by the player not playing Freddy and should be at least 36cm away from each other. The three objectives are the stables, the stone building and last of all Freddy’s tent. Freddy starts outside the camp boundary at any place chosen by his player. There are ten guards, these can be placed anywhere within the camp.
Scenario Forces
Foul Mouth Freddy
Veteran Orc Sergeant.
Freddy starts the scenario unarmed as he didn’t think to bring his musket out boozing with him.
Skill: Loud and Foul Mouth - Freddy has a coarse tongue and uses it often and well, In melee all mortal enemies suffer a -2 to their melee roll when fighting him.
Trait: Daisy Roots – Due to the size of his large previously-owned-by-an-Ogre boots Freddy gets +1 Impact when he wins a melee.
Flaw: Sauce – As per the rulebook.

The journey back was even more eventful as he was so drunk he drove down the seaside promenade instead of the main road! What would have happened if he was caught by the local police is anyone’s guess although I can picture him peddling for all his worth as the Puch had a top speed limited to just 30mph!

These three scenarios are based upon actual events – just the location has been changed to protect the not-so innocent!
I would also like to thank Craig Andrews, Editor of Barking Irons, for helping to ‘flesh-out’ and editing the original back-story and scenarios, he has turned sketchy notes into a truly fantastic story and modified (or made up) rules to fit in with Freddy’s latest adventure, I hope you enjoy reading it as much as I enjoyed writing it!
Miniatures for your Collection
VLE09 Foul Mouth Freddy
This code is limited to only 250 packs before the master and molds are destroyed. Supplied with numbered insert containing optional rules and uniform guide. This ninth code in the Very Limited Edition range is, like the others, limited to 250 numbered packs only.
Foul Mouth Freddy is currently available now from Alternative Armies webstore.
-
This article was originaly published on Alternative Armies' content portal, Barking Irons, and later Orcs in the Webbe. All of Freddy's adventures can be found tucked away on Craig Andrew's Orcs in the Webbe - check out this link.
I have been promising myself for some time that I would re-post Freddy's adventures onto this Blog. I am doing this for two reasons; firstly - there maybe some who have missed these short stories/scenarios and might find them of interest, secondly - I felt that I had more control over this Blog than OITW, after all Craig has in the past commented that he might close this portal down. If this happened then the Foul Mouth Freddy (and other adventures) would be lost to the Flintloque gamer.
Tony
Posted by Tony at 07:42