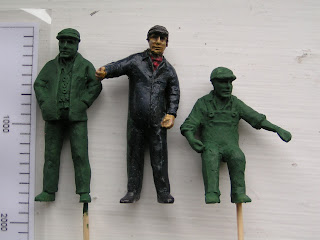 Following hot on the heels of my last post - The Green Engine, see this post for details, here are the last two figures or characters for my 1:27.7 (11mm = 1 foot) narrow gauge project- the seated engine driver and Fred alongside the standing driver that was featured in this post.

The seated driver is pretty much universal and should work with any 1:27.7 scale, 'scratch-built' engine (even motor car). He was actually converted from a seated female figure and the standing male (see earlier posts for how I cut-up and converted these plastic figures). Fred was inspired by Fred Dibnah dressed in his iconic denim work clothes and flat cap. If you look closely you can see his waistcoat and fob chain for his pocket watch! 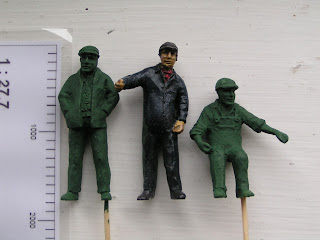 Rob Alderman of Hysterical Games has cast all six figures in grey resin and they will be available to buy in the next couple of days. The cost will be £10.00 per set with free postage to the UK (Europe and the Rest of the World postage charges have yet to be confirmed). Should you be interested in purchasing a set of either or both, please contact me at;

Image Three - The two sets of 1:27.7 scale figures;
Set One - Tom, Dick and Harry (shown on the right) and Set Two - Charlie, Finley and Fred (shown on the left). Details of how they were converted can be found by using the Narrow Gauge Label to the right. You can also 'click' on any of the images for a better view. 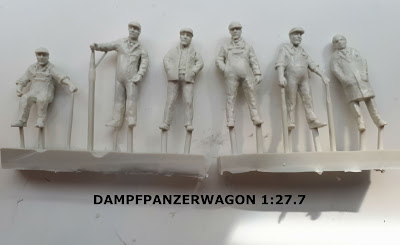 Please note that these is a third set of barrels and oil drums due very soon. I will post details as soon as I have a sample.