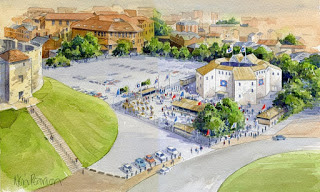 Last month, Sue and I had a couple of days visiting York. The reason for the visit was to experience the 'pop-up' Shakespeare theatre - The Rose Theatre, York. I had first become aware of this novel theatre back in May of this year, when I was reading a magazine article about the ambitious plans to build a temporary structure - a replica of Shakespeare's Rose Theatre from scaffolding, corrugated iron and wood. The originally structure stood in London, near to The Globe. For more details of this project see this link.

Having read about the plans, I researched the building which was originally used as a film set in the film Shakespeare in Love, but then put into storage. This is the first time that it has been re-built and used as a pop-up theatre. Hopefully not the last.

We  had planned our away-day as a two day visit with one night away and day one was travelling up. Once booked in to our hotel, it was off to walk the streets of York and visit the Rose. We had booked to see A Midsummer Night's Dream. The busy street scene around the Rose included authentic food stands selling mussels, drinks and huge locally sourced meat products plus an Elizabethan garden as well as street entertainment.

After the initial disappointment that a lot of what you experience while walking up the scaffolding steps and sitting in your seat is scaffolding and modern materials, the play started and you just got engrossed in the whole experience of an open-to-the-elements Elizabethan theatre.

We both enjoyed the play and performances with some quite spectacular aerial acrobatics. The actors interacted with the audience who were obviously enjoying it just as much as one another. There were many instances when the acting stopped as the laughter took over. I had not seen A Midsummer Night's Dream since I was in school/university and have to say that the performance was superb. On our way out we were able to chat to some of the cast who made it obvious that they had just as much fun as the audience.

The pop-up theatre was more expensive that a trip to the cinema - then a night away and travelling expenses pushed up the cost but we felt it was well worth it as a very special treat. Later a trip to an Italian restaurant and some red wine before walking back to the hotel rounded off a great day out.

Day two and we started early with a huge cooked breakfast in York. We then spent the whole day enjoying the unique experience of the streets and gifts of York, somewhere we had not visited for over twenty years.

The Rose Theatre was available between 25th June and the 2nd September and was a great idea and treat for Sue and I. As I write this Sue has just returned from a modern adaptation of Romeo and Juliet at the RSC, Stratford. Sue says that the Rose theatre experience was much more entertaining.