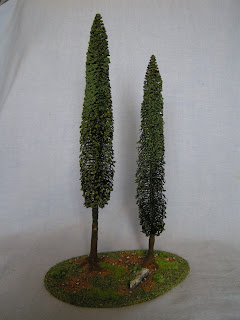 
This is another 'lost' tutorial that originally featured on Barking Irons On-Line from 2012 for details see this earlier post. I have reproduced it here as originally written.

My most recent Modelling Masterclass articles have concentrated on larger or more detailed pieces of terrain. I thought it would be helpful to have a more simplistic terrain building article – something that we all use in or gaming. This post shows how I turned some cheap, second-hand ‘toy’ trees into these pieces of Flintloque themed terrain. Four Trees. 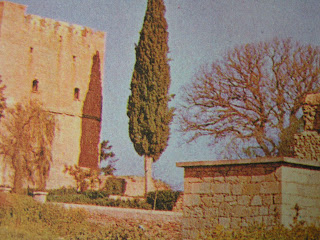 Some actual trees - the illustration was found in a children's book. 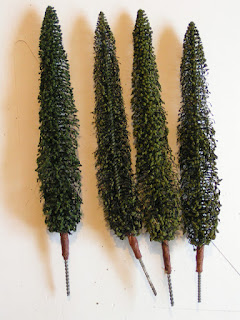 The four ‘toy’ trees were bought at a Toy and Train Fair for just £1.50 (for all four). They are simple bottle-brush trees with plastic or maybe even rubber trunks and were in a very sorry state with most of the foliage flocking missing. 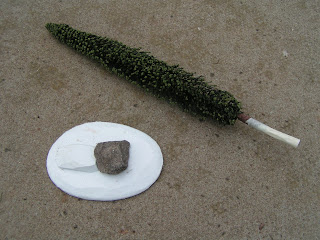 I removed the rubber trunks and clipped the twisted wire before inserting the trunks into small sections of balsawood dowel and securing with superglue. Once fully dry, I trimmed the trunks and then wrapped them with strips of ordinary masking tape.

While waiting for the glue to dry I cut three simple ovals of 3mm thick plastic card, chamfered the edges and smoothed out any rough edges with some sandpaper.

I added a small stone to each of the bases - taken from the garden. The stones serve two purposes; one to add some interest to the otherwise bare bases and secondly the stones add weight to the simple and light weight plastic bases.

The trunks were cut at different heights and even had some of the foliage removed with a sharp knife which once again added variety to the otherwise uniform trees. The base of the tree trunks were cut off and simply superglued to the plastic ovals. 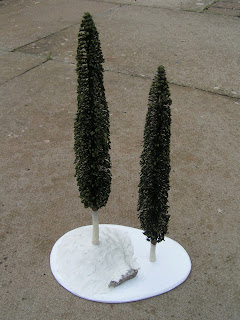 The bases were further detailed with DAS modelling clay which I built up over some PVA glue. This helped to blend in both the tree trunks and the stones. 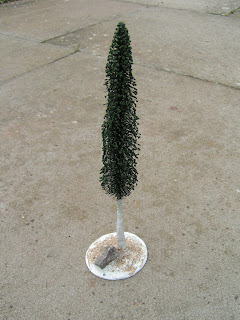 I further texture the bases by adding some sieved stones and sand. 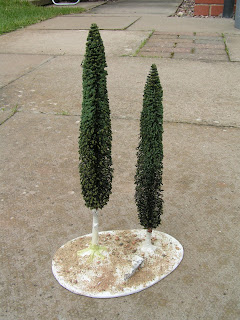 The large stand of two trees was further detailed with some larger stones or gravel, once again glued down over PVA glue.

I further detailed the plain trunks with some Milliput and DAS sculpting. 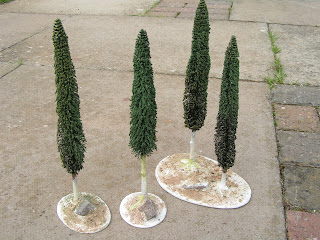 As stated earlier the toy trees were in a very sorry state and had lost most of their scatter material. I sprayed each of the trees with spray fixative and after placing some fine scatter material into a plastic bag shook the bag with the tree inside (holding on to the plastic base). Once I was happy with the effect, I sprayed the trees with some more spray fixative and set them aside to dry.

Prior to painting I mixed up a simple water/washing-up liquid/glue mix and painted it over the bases. This helps to hold the sand and small stones in place prior to the rigours of dry-brushing. 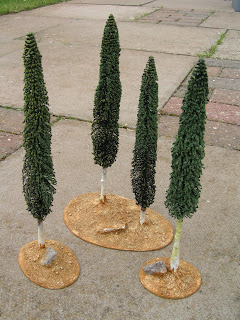 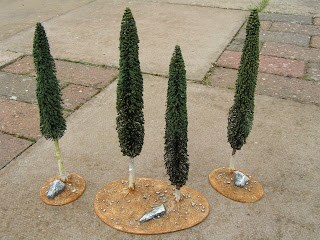 Next to be painted were the rocks and stones. I used a mix of Chaos Black and Skull White to which I added a little Snakebite Leather or Charred Brown. The added colour helps to relieve an otherwise stark grey stone colour. 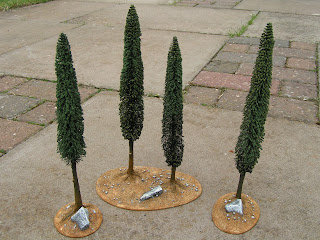 The trunks were painted in a dirty grey/brown colour. I tend not to worry too much about the exact colour, but did try to blend it from dark at the top to an almost Snakebite Leather at the base of the roots.

A couple of washes of black and dark brown and sepia and the painting was finished. Well almost. Did you notice that I have picked out some features on the trunks with lighter browns and creams? 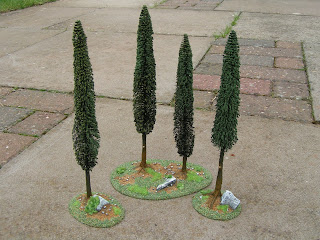 The painted bases were ‘flocked’ with standard railway modelling flock (dyed sawdust), static grass and some green shredded foam. I used a mixture of PVA glue and superglue to hold them in place. 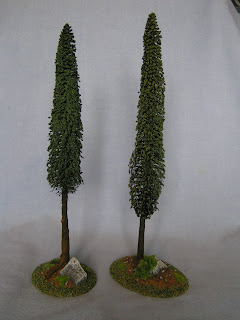 The two single tree stands have been photographed against a plain  background which shows the painting and modelling to better effect. 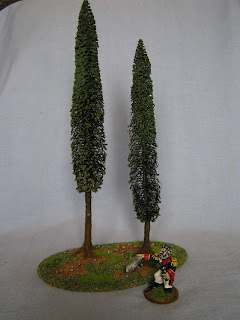 Bombardier Bedford pointing out some interesting feature or other, here you see the larger two tree stand. The trees stand between 180mm and 220mm tall. 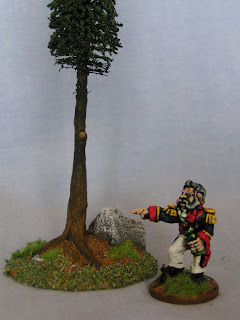 A close-up image showing the bases in greater detail.

I find that the slightly large tree terrain bases I use are more stable than usual smaller bases. In gaming terms I use the following rule;


If a figure is in base-to-base contact with the base of trees he (or she) is not in cover. If the same miniature is either partially or fully situated on the piece of terrain then he is in cover. The cover can be further defined as hard cover or soft cover.

The cost for all four trees was £1.50. The modelling and painting took place over a single weekend and I now have three small terrain pieces to add to my growing collection. I would be interested to hear comments.

Very interesting, thank you for re posting this.

Interesting question. When you paint un-diluted PVA glue onto terrain the glue can be too thick and any sand or small stones you scatter onto the glue is just lying on the surface. If you dilute the PVA glue this helps and the scatter material is held firmer but still on the surface of the glue.

If you add a flow improver to the mix The diluted glue has its surface tension broken and it will actually absorb the scatter material, thereby giving a much better bond. Washing-up liquid is the flow improver (although you can buy it at art shops.

Two further points.
If you paint miniatures - adding a tiny drop off flow improver or washing up liquid to your water pot will help with acrylic paints and make them smoother and easier to use. Secondly - I have read that the cheaper the washing-up liquid the better it works.

In summary;
The washing-up liquid is only applied in tiny drops (one drop to a full jar of water is more than enough) A good experiment is; fill a glass with water and then try to float a pin on the surface - you can do this as the surface tension of the water will be greater than the weight of the pin. If you now add Wet-Water (the term for water with flow improver or washing-up liquid added to the mix) the pin will break the water tension and sink.

Thanks for posting this Tony!

It occurs to me that with the availability of cheap trees from China making a sad think flocked tree look healthier is really a useful trick, and your careful build up of the trunk and re-flocking does just that.

Thank you Tony for your reply. I had wondered if it was about the surface tension. I shall use this tip myself from now on when coating my textured terrain bases prior to painting.