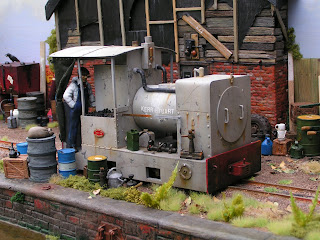 The model is constructed to the scale of 11mm = 1 foot or 1:27.7 scale running on 16.5mm gauge track to represent an 18 inch gauge industrial locomotive/layout. It was built by me from plastic card on a highly modified Hornby 'Smokey Joe' chassis with an added metal fly wheel. The main painting was done with my DeVilbiss airbrush using Vallejo acrylic paints after which the Kerr Stuart lettering was applied with white Letraset rub-down letters and weathered with acrylic paints, weathering powders and artists watercolour pencils. The plans were re-drawn by me from an article in Narrow Lines issue 56.

I have also applied etched-brass names plates and included a modified driver figure. 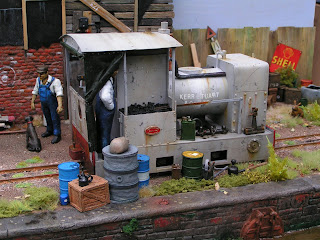 I had intended to offer the construction and painting steps as a magazine feature, but as none of the magazines I approached were interested and it has now been featured in Narrow Lines, I have included some detailed images of the finished model here. 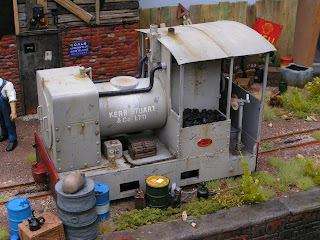 Hopefully I can include more images showing how it was built and painted at a later date.