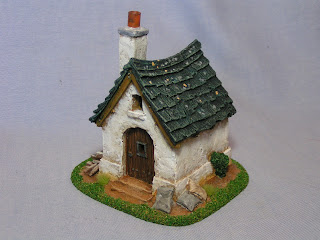 This latest Blog post shows a painted and varnished Gnomish Bakery - a model that was sculpted and modelled by me for the Fantasy/WW2 game Panzerfauste, for more details of the buildings I have produced for this game, see this link.

The model has been slightly modified and is the original resin casting (the master was destroyed in the initial mould making process), the production mould is slightly different, and cast in a smoother and more easily worked resin. 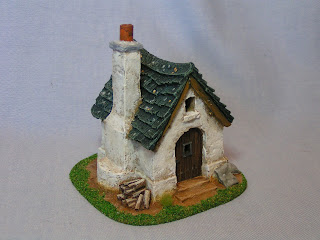 I filled-in the open oven to the side and spent time re-modelling the roof tiles which were also damaged on the initial casting (but repaired on the production mould and models).

I believe that they are still available to purchase and would suggest you contact Steve Blease via this Blog should you be interested in purchasing this or any of the other pieces of themed terrain or some of the superbly cast resin miniatures. 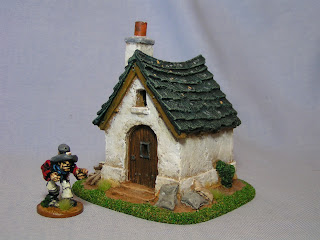 The Panzerfauste project has had one or two issues since Hysterial Games closed down, but I am also aware that Steve is doing all he can to fulfil the Kickstarter pledges and is sometimes seen selling models at various wargame shows.

The model bakery was painted in acrylic paints over an off-white basecoat and then varnished with Galleria Matt Varnish before being finished off with some dyed sawdust scatter material glued over PVA glue. The Flintloque miniature was painted at the same time and gives an idea of the size of this small piece of terrain.