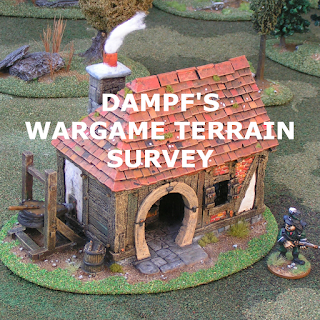 During the month of September I have been running a simple survey - three questions which should help me when producing articles or tutorials for future magazine articles. The questions were;

What scale or scales should I use when building my scratch built models?

Do you prefer fixed roofs or lift off roofs?

Do you prefer decorative bases or no bases?

The results are now in and I would firstly like to thank everyone who took part, those that replied to this initial post and the few who used either Instagram or The Miniatures Page to supply their answers. I have collated all of the replies to produce this result;

Not surprisingly 28mm scale came out on top although with over 93% mentioning this most common wargame figure scale, at least in part or in conjunction with another, I think the dominance of 28mm was more than I had expected.

In second place was 15mm with 44% and in third place was less than 15mm with just 7% with comments mentioning both 6mm and 10mm figure scales.

Lift off roof or fixed?

The response to this question was a almost exactly 2/3rd yes and 1/3rd no with only 2 respondents having no preference. This goes against my own preference as I prefer fixed roofs. So I will have to take a serious look at any future models or tutorial plans.

There were a couple of respondents to the second part of this question - detailed interiors or plain interiors with no discernible winner or preference.

Decorative bases or no bases?

There was an obvious preference for some sort of base, either decorative or just practical, with the remaining No Base or No Preference about the same - between 9% and 5%.

So there you have it; Future magazine articles/tutorials will concentrate on 28mm scale wargame models with lift off roofs and some sort of base although I still see some room for the odd exception.

Once again, thanks to everyone who took part.

Looking forward to seeing what you come up with - I think the lift off roof result might be because people want to see how you would approach that task with your methods, as well as the seemingly increasing popularity of WWII skirmish games and similar.