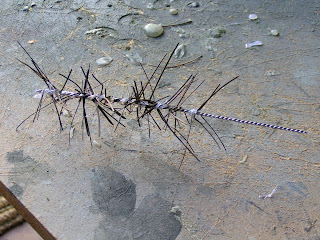 My earlier posts have shown how I have modified shop bought trees, trimming branches and re-flocking as well as re-basing the models to produce more realistic models. In these posts I will show how I built a model tree from scratch.

I used some bristles from a garden broom and wire to make this armature which was twisted with the aid of an electric drill and the cup hook (shown next to the broom on the right). I found it best to add some hot glue to the bristles prior to twisting as they had a nasty habit of just falling off the wire when I tried to twist them. 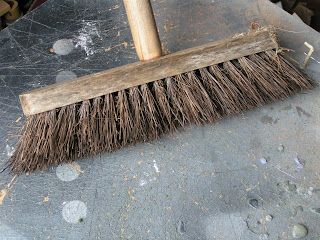 The rather scrawny tree frame had a trunk added from some plastic tubing (a piece of plastic balloon handle) which was also glued in place with my hot glue gun. The tree was then painted with some grey/brown acrylic paint to which I had added standard ready-mixed filler (to bulk out the trunk). 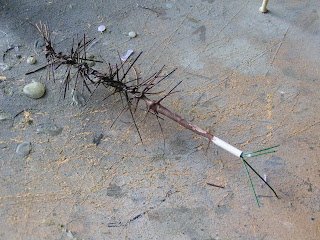 The root structure was modelled from some florist's wire glued in place with superglue. The tree frame didn't take that long to make, but was fiddly and I'm not sure it was worth it. I will post further images once I have some 'body' or foliage added.