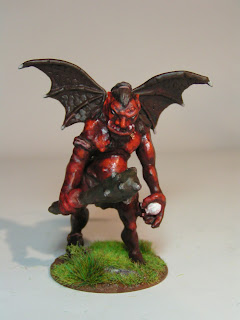 Demon for The Silver Bayonet

The model is based on a Metal Giant from the Grim Reaper Nasteez range and had been previously converted, based and basecoated as a Frost Giant for my 40mm Flash Gordon collection. With the launch of The Silver Bayonet, I was looking around for suitable proxy miniatures and thought about using the mini as a Troll, but once I added some bat wings to the shoulders, the figure took on a whole new persona.

The wings were also from my 'spares box' (a bat or lizard mini) and were glued in place after some Dremel surgery. The join was hidden under Green Stuff and the mini was 'cleaned up' ready for undercoating grey. The Demon is mounted on to a 48mm washer with the groundwork built up from Milliput and further textured with sieved stones and sand. 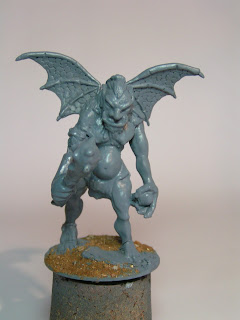 The red colour scheme was copied from a similar Demon miniature seen on the Internet. The colour was built up from a dark chocolate brown and highlighted with bright red from the Golden Acrylics range. The model was then 'washed' with some home-made washes made using watercolur acrylic inks and acrylic medium (both products were Christmas presents) - see this post for more information. 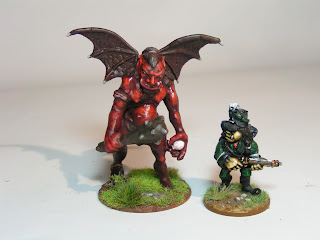 I have varnished the finished figure with both matt and gloss varnishes and decorated the base with static grass and tufts. The Demon miniature is 55mm tall (head to toe) and slightly taller if you measure to the top of the wings. Here you can see him alongside a Flintloque RifleOrc for comparison.