The following models are in response to a feature on another Blog, see;

I thought that the idea was fantastic and decided I needed to model a couple of Aerofauna of my own for my Space 1889/Aeronef games. The first photo shows the Sky Floaters - passive bags of gas with a small body and long tendrils, although they look harmless and can be easily avoided, the Sky Floaters do pack a nasty punch and can easily disable a crew with their stinging tendrils. The stings, although very painful are not fatal. These creatures float on the wind in packs and are not known to be aggressive. 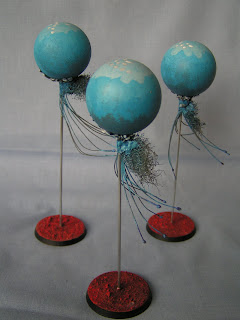 The second model, a Canal Crab Apple is a totally different animal, being very dangerous and a true predator. The tendrils and tentacles can kill a man with ease and the creature has a tendency to hunt its prey, sneaking up on any living being through detecting sound and movement. Once stung the injuries are nearly always fatal. Luckily these Canal Apples are very rare. 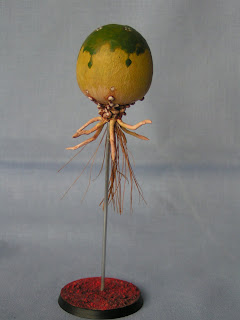 The remaining photos show work-in-progress shots, The Floaters being made from the plastic balls found in roll-on under-arm deodorant and florists wire with torn strips of green scouring pad. 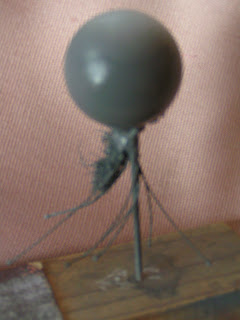 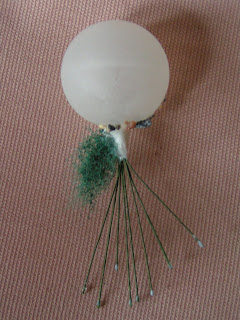 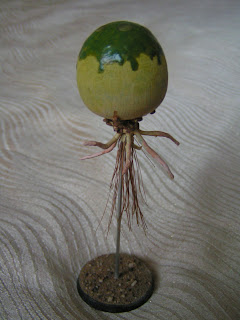 The Crab Apple was made from a wooden air-freshener in the shape of an apple, with broom bristle tendrils and tentacles made from paper-covered wire 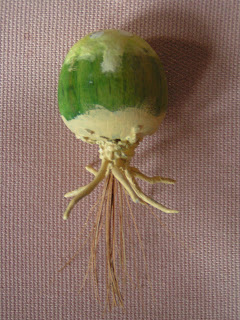 They have been great fun to build and paint. I would expect to build a couple more. To give an idea of scale, both designs are about 32mm round and the bases are 40mm round Games Workshop bases.

The Crab Apple was based on an in-car wooden air freshener which was turned up-side-down, the top (which used to be the bottom) has some DAS modelling clay added to modify the shape and the stalk was drilled to accept the broom bristles which were first cut from the broom, bound with fuse wire and glued in the hole. The tentacles are more fuse wire, first covered with silver foil and then newspaper, the thick end has a small piece of the fuse wire still showing and attached in to the base via a pre-drilled hole. I added seven tentacles (although I modelled eight) - I wanted the model to be more alien! I coated the tentacles with white glue and some superglue. On the top of the Crab Apple I added five paper discs, punched from a self-adhesive label.

I then added small smooth stones (picked up on a beach in Spain some time ago and sieved) to the base with PVA glue and even a couple individually added with superglue, once set they were 'fixed' with watered-down PVA glue.

Once I was satisfied with the shape I painted the model with a mixture of acrylic paints and GW washes. The base is a piece of radio-controlled rod, attached to a GW 40mm round base to which a metal washer has been glued to the underneath, the groundwork is sand over PVA glue.

'Double click' on the photo above for a better photo.

Absolutely wonderful! These are amazing and the speed at which you brought them into being is staggering. I may borrow some of your materials ideas for future aurofauna.

On the Crab Apple, what did you do for the bumps and details at the bottom? Green stuff? Something else?

I am definitely going to create more. Even if I can't use them all, they are too fun to make and I like finding new and creative ways to make them.

The bumps on the base of each Aerofauna is in fact small stones, I picked up some sand and stones when on holiday in Spain, when you sieve the sand, the stones that are left are ideal for this organic modelling - each about 2 - 5mm and smooth.

Try a local beach or stream for similar pieces.

I attached them with PVA Glue (and some with superglue)before 'fixing' them with watered-down PVA.

The effect is very easy to achieve.

I figured they had to be some sort of grit material. I may have to try doing that with some of my later models, of which I have already started several.

One thing I may try doing in the future is using cheap plastic beads instead of the polystyrene berries that come on many of the deco sprigs. Though I have been able to work through them, there is alway a melt risk and it makes spray priming them impossible.

I've also started some floating sperm creatures, like yours. I am away for the weekend, so these may have to wait until I return on Sunday.

Like you I have no idea what I am going to use them for - I just find that this simple modelling is so satisfying.

I know what you mean by the enjoyment of the simple modeling. While at work yesterday, I was able to build nearly a dozen aerofauna of three different kinds. I will get them posted as soon as I can paint them up.

This time I tried my hand at using some gray stuff to add veining and other texture to them.

I have one idea that is giving me a bit of trouble, though. I would like to do some of floating "raft" type creature that would cover an area. I want to make a few of them as navigational hazards. I just can't figure out what to use to make them look alive but still laying relatively flat.

Brilliant stuff Tony - very nice. The yellow/green one is my favourite though, very menacing, love it. All very inspiring - thanks!

Yours in a white wine sauce,
Tas