When I first read that Foundry were to produce this compendium I was really looking forward to obtaining a copy. Within a day of reading about the release on TMP and The Lead Adventure, I had ordered a copy.

The book arrived just a couple of days later and after work I eagerly opened the package settled down on the sofa and quickly glanced through the pages. I was not impressed, the construction articles promised in the preview were far to few for my liking and I can remember passing comment to my wife and daughter that there was little of interest to me.

Since then I have read most of the articles and feel that my initial impression was a little harsh, in fact I would now reconsider the book to be good, not great and still below my (very high) expectations but a good read. 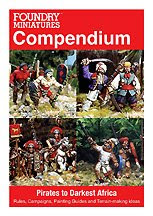 I must now justify the comments I have made. The initial previews led me to believe that there would be more constructional articles, more Gary Chalk articles. In fact there are two, both of which I already have as they were initially printed in Wargames Illustrated and I have them filed in a clear-pocket scrapbook. The previews also suggested a 'rounded selection of Foundry articles or features', they are there but of such a varied selection that I would suggest the book reads more like a large magazine. I do not think that the reviews were misleading, just that I had hoped there would have been more.

I have, as stated above now read all but a very few of the articles from start to finish and must admit that I have enjoyed them and found them informative and easy to read. I still think that Foundry could do better and a compendium of Roman, or Inca, or Gladiator articles in a single book might be a better way forward, rather than this miss-mash of different magazine pieces, brought together with little or no cohesion.

I still look forward to a compilation of constructional articles, which I feel would be a good project and sell well. In conclusion, I would say a good read, but could have been so much better. Plus the £15.00 price ticket (no P&P was charged on this order) could be seen as just a little 'over-the-top'.

I hope that this review helps others who are looking to purchase the book decide if it is right for them, maybe the best piece of advice is to check it out at a show, before buying.