Standing over 9 feet tall this giant flaming entity, was once thought to be a God by the inhabitants of the volcanic Kronos. We now know it can be defeated by water and cold based weapons, which instead of killing the creature can shrink it down to a tiny spark! 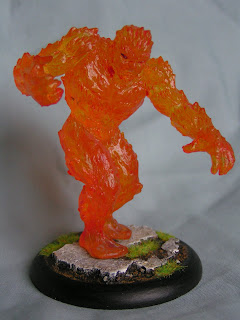 The miniature is a ZZAX figure from WizKids, the Marvel series (ZZAX 126 #25) and was picked up at Waylands Forge, Birmingham for a couple of pounds earlier this year. I would like to tell you that I have completely re-painted it, adding washes and highlights to achieve the finish you now see. The truth is that I cut it from the HeroClix base and glued it on to a painted 50mm round base with nothing more than a touch of paint to the eyes and mouth!

The miniature is cast in orange-tinted clear resin and stands 60mm tall, it is mounted on a 50mm round base - one of the simplest Flash Gordon conversions I have even done.

Isn't nice to find one that practically makes itself? I have to say I've been having a grand time following your Flash Gordon project.