A real beast of a miniature - a Komok, known to the cavemen as "the eater of men." The base miniature is a Purple Worm from the D&D collectable miniatures game, re-based and modelled before being painted with various acrylic paints. 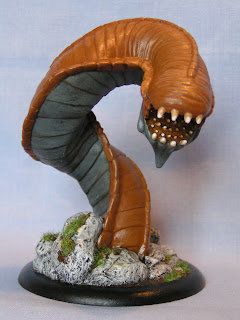 The rock base needed some modelling with Milliput and fine sand. The body of the worm, also had considerable re-modelling to hide some of the very prominent mould lines and various joints.

I used Milliput, DAS and filler, before sanding them smooth and coating the miniature and base with dilute PVA glue prior to painting over a grey basecoat. Once the main colours were laid down I again used Games Workshop Washes - Black and Brown to add surface detail to the sculpt. 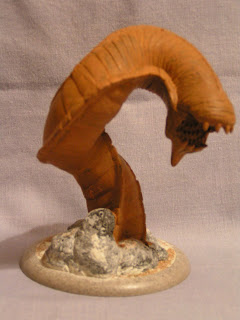 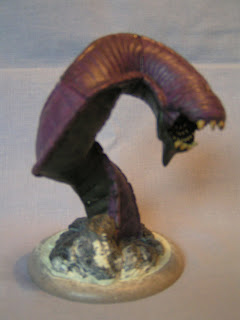 The final two photos, show work-in-progress shots which highlight some of the detailing prior to painting and having the base colours added.
The miniature is based on a 80mm round resin base from http://www.fenrisgames.com/ and stands 120mm tall. I painted the model grey and brown as I did not want the miniature to be recognisable as a Purple Worm. The grey rock area is OK, but I am not sure this is my best painting of grey rock or stone. Once again the D&D miniature range offers great value for money.

Cavemen you say? Venturing into prehistorics or is this yet another tribe of Mongo?

Just another tribe of Mongo - check out;

Thanks for the wiki heads-up. I was really just joshing with you.