Make a Jetbike by November 30th

Finished - and just in time.

Here is my entry in to the Rattrap Productions competition to build a Jetbike by November 30th. It will come as no surprise that my Jetbike is inspired by Flash Gordon and built to the same 40mm scale that all of my Flash collection is. 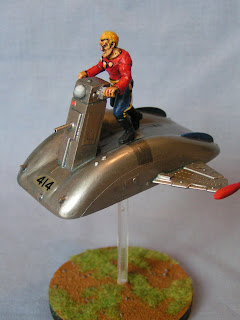 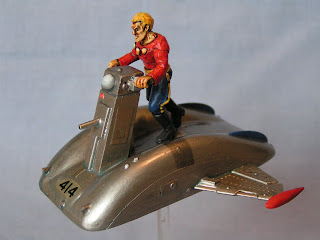 Using a Testors Salt Flats Racer as the base, the main body was quickly put together. The miniature Flash is from Graven Images, a converted Nazi soldier.

I am happy with the finished model, but am not sure how I will use it in my own skirmish games.
Tony

In greater detail;
The design is based on the 'skimmer' used in the Queen - Flash Gordon film. I tried to model the hull as the film version, but found the many angles too difficult to reproduce. I already had a Salt Flats Racer model from the American producer Testors and thought that this would make a great base for a more curved skimmer.

The body of the racer was first glued to a base, then a section from the centre removed and the two hull pieces glues back together. Similarly a section was then removed from the middle section and the two pieces glued together and a base added. The curved hull was then built up with scrap plastic and covered with two part epoxy and sanded smooth. This took some time and a lot of sanding/smoothing/filling/sanding etc. etc.

The figure is from Graven Images - much re-modelled and converted.

Painting was done with acrylics and washed with Games Workshop washes and watered down inks.

It's awesome! Don't worry about how you will use it. Sometimes a model is just worth doing for modelling sake.

In this case - I will agree.

Great fun to design and then it was built in a completely different way!