Today I have included some preliminary sketches and ideas that have helped me with this project. In part one I commented how the construction article in No Quarter issue 21 was the main stepping-off point and the stone shrine area follows these dimensions. The main stone platform has a ground area of 9inches x 9inches, the upper step is 6inches x 6inches and the monolith has a base area of 3inches x 3inches. The height from base of the stone shrine to the top of the Amber Monolith is 8.5inches. 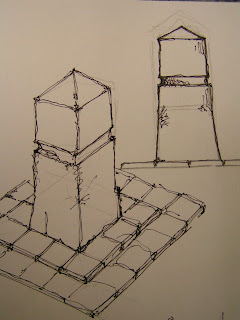 Photo One - shows the final designs sketch for the monolith shape and how it will fit onto the shrine. The basic shape owes a lot to illustrations in the Privateer Press magazines No Quarter. 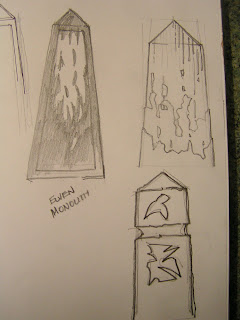 Photo Two - shows how early designs were refined. The Elven Monolith taking a lot of ideas from the Forge World resin monolith. The second illustration was intended to be an amber coloured rock, but the edges of the 5mm Plexiglass would have been too prominent and without mitred corners (very difficult on Plexiglass, without specialised tools) the finish I wanted would have been impossible. 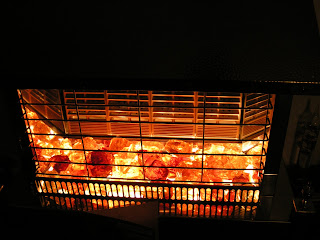 Photo Three - I have included this illustration of a gas fire to give an idea of the finish I was looking for. 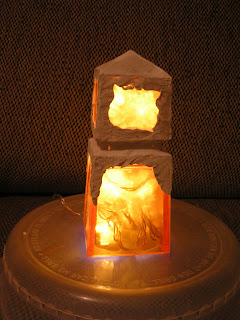 Photo Four - the latest illustration of work-in-progress, with the top of the monolith constructed from plastic card covered in DAS. I have still not decided on the final designs of the runes or icons and have been searching the Internet for some inspiration.
More to follow...
Tony
Posted by Tony at 00:29

This is turning out to be an amazing project. Very inventive as well.