Yesterday and today I have been concentrating on sealing the edges of the 2 foot x 2 foot tile. and developing a brand new idea a tinted perspex monolith, lit from within - more details later.

I seal the edges of the foam board and exposed cardboard with strips of newspaper and PVA glue. I tear the paper into 3inch wide strips and apply over watered-down PVA glue, then more glue. Three separate layers of paper and four of glue - that's glue, paper, glue, paper, glue, paper and finally glue. The first layer of newspaper running from the top, down the sides and under the cardboard, the second across the joints from side-to-side and lastly top, side, bottom as the first layer. All sealed with another coat of watered-down PVA glue. Once the mix is fully dry I will apply some filler and sand smooth. 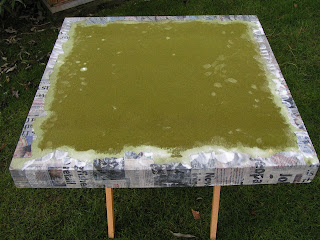 Photo One - the foam tile with edges sealed. 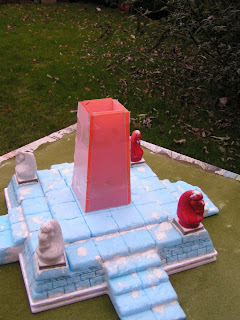 Photo Two - shows the 5mm thick clear-tinted Perspex (still with protective paper film and held together, temporarily with sellotape). Note; the additional step/layer on the top of the pyramid or Zigarat added yesterday and detailed with DAS modelling clay. 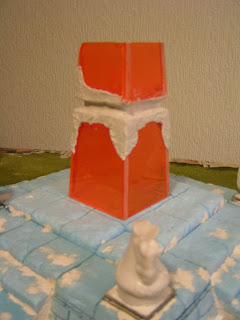 Photo Three - shows the Perspex monolith glued together with superglue and mounted on to the top of the shrine. I have started to add DAS modelling clay to the sides. My intention is to add a light or light effects into the tinted monolith with small icons carved into the DAS and back to the orange tinted acrylic sheet panels, hopefully giving an effect of glowing runes on a solid stone monolith!
In greater detail;
I picked up the 5mm Perspex acrylic sheet from the internet. I had wanted to use green tinted Perspex, but thought that the orange finish would give a 'warmer' feeling to the completed model. (I am also planning on using the Games Workshop orange wash to further tint the Orange Perspex). I bought 5mm thick sheets as I could use it for other projects if this idea fails.
I marked out the Perspex with a marker pen and cut the first couple of sides with a coping saw. The final two sides were scored and snapped, which gave a much better finish. The joint which cuts the monolith into two (top and base) was easy to reproduce, just 'cut and shut' with scrap Perspex. The inside surface was roughed up with sandpaper (the effect was tested by holding the panels against my modelling light). Construction was easy and I used superglue and accelerator. I sealed the joint between the top and bottom sections with sellotape before adding the DAS over a coat of PVA glue. The lid or top of the monolith will have a squat pyramid structure in card or plastic card, covered with DAS.
The lit monolith is a major new technique for me and one that I am still not convinced will work.
More to follow...
Tony
Posted by Tony at 10:00