I picked this resin miniature up from a company called Scibor, see; http://www.sciborminiatures.com/
The figure is a 28mm Dwarf Napoleon, SF28.14 and comes with a beautifully cast resin base. I chose to mount him on to a UK 2p coin (as are the bulk of my Flintloque collection). I first superglued a piece of plastic card to the coin, then superglued the miniature to the plastic card and built up the base with Milliput which was further detailed with fine sand.
I needed to do some repair work to the bicorne, which had either been broken in transit or had an air bubble in the cast resin. This was done with 'green stuff' and smoothed out with some water and a sculpting tool.
The figure was painted over a black/dark brown base colour with the face being the first thing I detailed. The colour scheme is copied from a 54mm model of Napoleon I saw in the modelling magazine - Military Modelling. 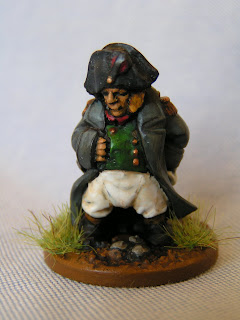 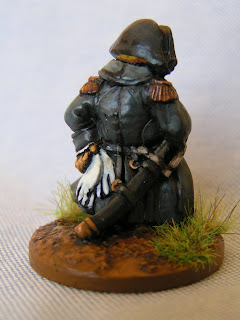 The bare resin casting, without base. The miniature stands 28mm tall (top of bicorne to feet). 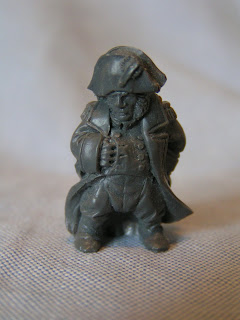 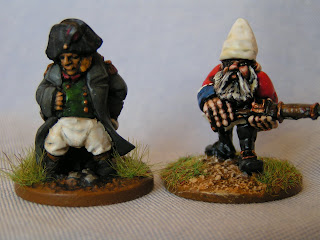 I have no idea how I'll end up using this miniature, but who cares - I still loved painting it and would recommend this particular sculpt to other Flintloque collectors looking for some variety.
I have also picked up one of the Manfred Von Leftoffen miniatures (SF28.08) and although advertised as 28mm, stands nearer to 54mm tall! I intend building this as a display piece and my idea is to re-build the gun to a flintlock pistol, but not straight away, I have too many projects on the go.
Tony
Posted by Tony at 00:50

I agree he does look thoughtful.