Issue 266 of Wargames Illustrated has just arrived at WHS and there is yet another set of photos featuring the 40mm terrain and buildings from Grand Manner. In particular pages 56 and 57 have a two page spread by Dave Bodley showing The Battle of Guilford Courthouse, with the British advancing from Hoskin's Farm, towards the first line of American Militia. All of the building are from my personal collection, where the 'masters' were sculpted by me for the 40mm AWI/ACW range from Grand Manner. The additional terrain is from Dave while the miniatures were lent by Front Rank (some of their 40mm AWI display miniatures that you can normally see on their stand at trade shows).
I know that as a collector and painter of model soldiers rather than a true wargamer, illustrations or 'eye-candy' such as these photos are true features and great gaming or demo. inspiration. I must also congratulate Dave on the fantastic photos. 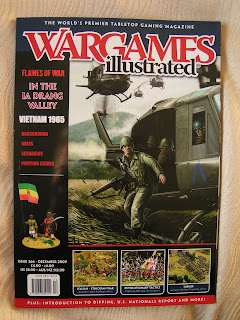 In reviewing the contents of the magazine - I felt that this Vietnam themed issue was not quite as interesting as the previous AWI themed issue, although I can complement the publishers on once again putting together a beautifully illustrated and very colourful magazine.
My favourite articles (so far as I am still to read all of the contents) are;
Warning - this hobby may contain nuts, a tongue-in-cheek review of various characters that inhabit this hobby! Great fun.
The Italo-Ethiopian War of 1935-36, a subject matter that is completely new to me and was very well written.
Finally in my attempt to paint up some 40mm AWI miniatures (one at a time), here is the latest. Once again a 40mm Front Rank figure painted as a minuteman. The paint scheme was built up over a dark brown base, painted with mainly GW and Vallejo colours and washed with black and dark brown GW washes.
The model is mounted on to a round metal washer and I have used some Grass Clumps (see earlier review) rather than static grass. 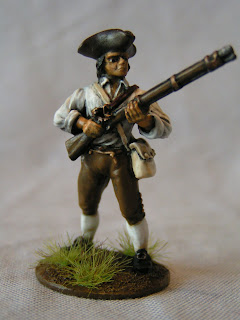