The story of this particular build has gone on a little longer than I had planned, but Hellboy is now finished!
Photo One - Shows the painting completed. Since the last post the base has been tidied up (I have also sponged on some very dark brown to break up the stark plain black) and the detail painting has been finalised. I am very pleased with the Lego base, both the modelling of and the ash grey colour. I also think that the coat has worked well. 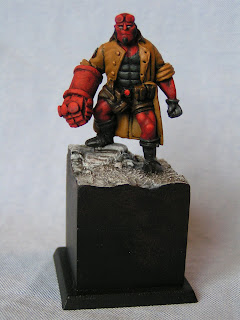 Photo Two - The model varnished, flocked and finished. The shrub work is ground-up foam which has been mixed with uPVA glue, some water and flow improver, then 'scooped' on to the groundwork with a couple of small cocktail stirrers. Once fully dry this mix is very strong. 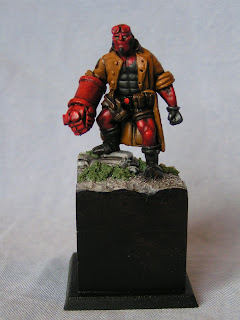 Photos Three to Six - Show the finished miniature from different angles. I personally think that the 'straight-on' view shows the figure best. 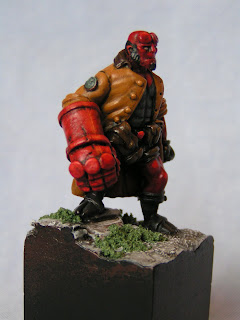 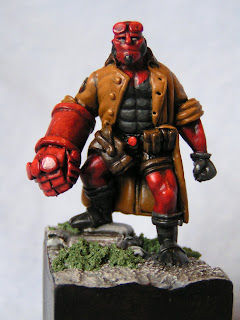 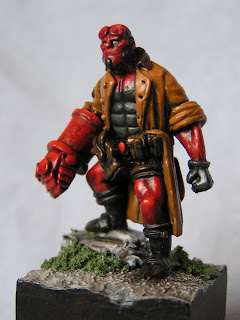 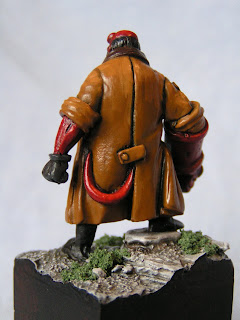 Photo Seven - A final close up. 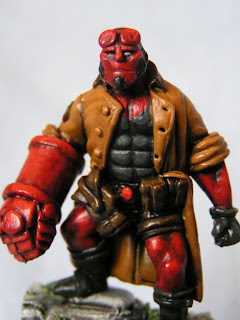 Varnishing was done with Ronseal Gloss Varnish, then water-based mat acrylic varnish/medium, before the ground foam was added.
The bulk of the painting was carried out with one of the new Games Workshop standard brushes. I have nothing but praise for these, they perform very well and are sturdy enough to take some quite rough treatment.
The finished model was recently shown to my son - my toughest critic. He wanted to know why I had not painted in the models eyes as they are just white? I said that in the comic books Hellboy had glowing white eyes. Gary said that the model would look better with the eyes painted in! So far I have left them as pure white.
The Hellboy model is 45mm tall or 80mm tall, base of plinth to top of head.
Tony
Posted by Tony at 05:02

The changes you included make a difference respect with the details, that now are more notorious but not excessively to conserve the quality of the design.