With the skeleton painted it was onto finishing the base. The base is painted in the same technique but different colours to my usual Flintloque bases.
Photo One - I have started with a couple of thinned base coats of an acrylic paint from Dulux called Antique Pine. 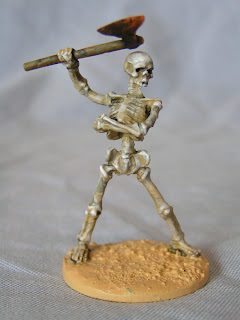 Photo Two - the same base with a'wash' of Sepia from Games Workshop. 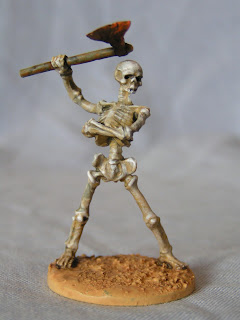 Photo Three - Highlighted with the Antique Pine and some Skull White. Notice how I have added additional washes to the area around the skeletons feet. 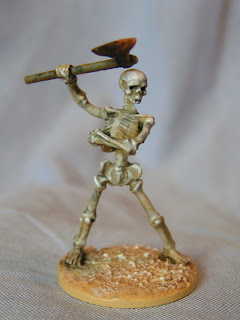 Photo Four - The varnished and flocked base. I have varnished the whole figure and base with Ronseal Toughcoat Gloss Varnish then once fully dry two coats of Galleria Acrylic Matt Varnish.
I have used three types of scatter of flock to give a parched effect base which were in turn added over uPVA glue. 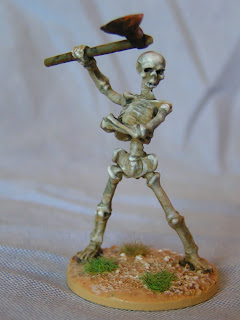 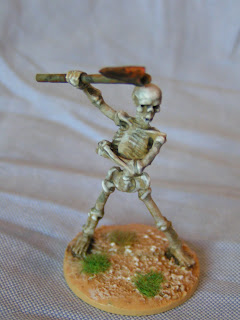 Photo Six - A little bit of fun! The emerging skeleton was based on a broken model which I have half buried in Milliput otherwise the models were painted in the same way. 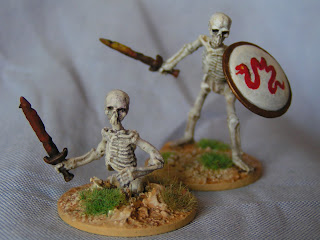 Photo Seven - The finished Warband. Seven 'full' skeletons, one half emerged and two with just arms and weapons breaking through. You can 'click' on any of the images for a better view.
All of the Spartan Games, Myth miniatures came with large round shields but I have decided to equip just three with shields and keep the rest in my 'spares' box. 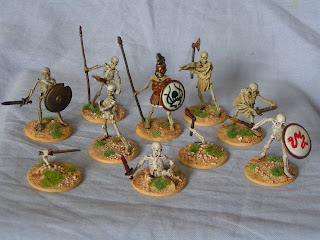 And now I really must get a band of human Hoplites finished.
Tony
Posted by Tony at 00:33

These look excellent. I remember watching Jason and the Argonaughts as a little kid and being terrified of the Children of the Hydra... And now its firmly one of my favorite movies.

I loved that film as a kid even if it did cause me sleepless nights.

Great figures, they look particularly mouldy! Using just the limbs is a great way of creating a larger unit - clever.

Nice work and I will try this recipe. A little bit too "clean" for my taste but otherwise splendid brush work.