In part two I teased you with a single sketch and told you something of the background to the construction of this simple piece of Typhon themed terrain. Here I will show you photos of the stages of development this piece went through.
The well/fountain was constructed out of strips of Blue Foam, cut from a larger block with a 18mm 'snap-off' bladed craft knife (always try to fit a new blade before working with foam - it makes life so much easier) . Construction was completed with uPVA glue and strengthened with steel pins.
The sequence of building was; The basic trough, the three pieces were glued together and pinned before a base (water level) was added. The bottom of the back wall piece was cut out and the two small pillars added, later two additional decorative top pieces were stuck on. The plinth stone (the one with the Greek writing) was added and then the triangular roof shape was glued on to the plinth. Next, I built up the top of the roof section and finally added the decoration to the upper section. The decoration are two small squares of thin blue foam and a plastic disc cut from a Games Workshop tank wheel.
Once the basic construction was glued and pinned, I added some DAS Modelling clay to 'blend-in' the separate foam pieces and sanded the edges to be more irregular and worn. I have also impressed a rough stone into the Blue Foam to add some additional texture.
Photos One and Two - The basic and finished well. Which at this stage stands 60mm wide, 65mm tall and 40mm deep. 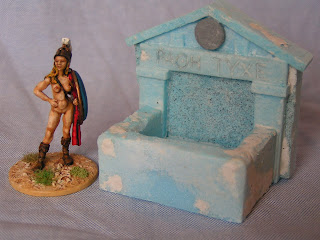 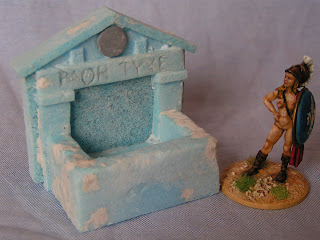 Photos Three and Four - Not content, I have added a paved floor to the well. This was built from some White Foam, actually the foam used as a base for frozen Pizza.
I cut the paving with a scalpel and then ran a pencil into the lines to accentuate them. Finally I have impressed a rough stone onto/into the foam to add texture. The base paving is 125mm wide x 75mm deep.
In these photos, you should also be able to see additional filling with DAS and some basic texturing - this time done with Artists modelling paste, which is used to thicken or add texture to standard acrylic paints. Remember that you can always 'click' on the images to see more. 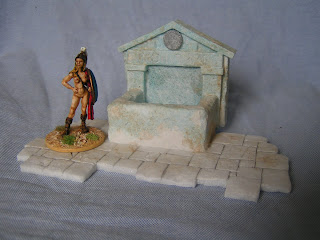 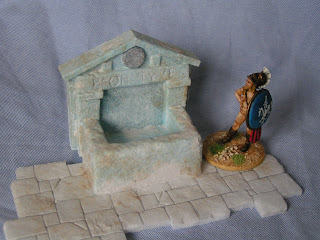 Photos Five and Six - I felt that a well/fountain needed a back-drop and so I built this small section of stone wall. The wall is a piece of 8mm thick Blue Foam and the stone blocks are first cut into the foam with a scalpel and then enlarged with a pencil, once again I have used a stone to impress texture. I have also opened up some of the joints with a 'spear-tip shaped' sculpting tool.
The wall is glued and pinned to the well and the gaps filled with DAS Modelling Clay. The wall is 85mm tall x 130mm wide. 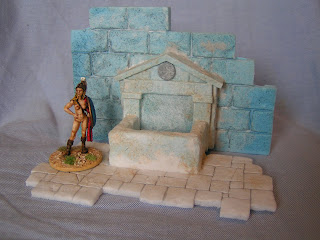 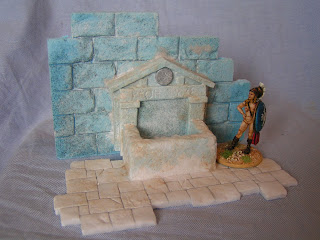 Hopefully you can see the construction steps and how this simple piece of terrain has grown! In part four - yes there is more, much more. I will show you how this small piece of terrain grew and grew.
Should anyone have any questions, you know how to contact me.
Tony
Posted by Tony at 00:14

Very cool. I often use similar techniques myself (the ruined temple I put on my blog not so long ago) Love the fountain!

This is the perfect blog for anyone who wants to know about this topic. You know so much its almost hard to argue with you (not that I really would want...HaHa). You definitely put a new spin on a subject thats been written about for years. Great stuff, just great! Singapore Public Holidays 2012 Calendar Thanksgiving 2011