Simians and a standing stone

Continuing with my painting marathon and trying to make a dent in my 'lead mountain' I have based and painted these Monkeys for my Flash Gordon collection.

The group of four simians were all painted over a simple black basecoat. 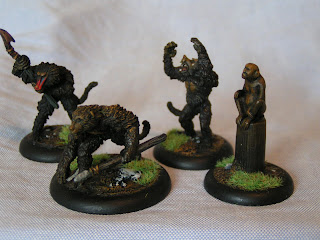 Photo Two - The metal monkeys - three miniatures from Lance and Laser (an American based miniatures company). Two are based on 30mm round bases, the third on a 40mm base. 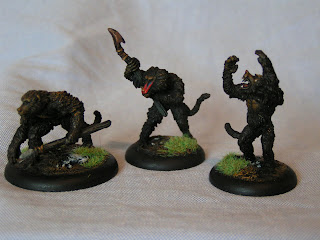 Photo Three - A resin monkey sitting on top of a tree trunk.  The figure was picked up at a tradeshow some time ago and has sat contently in my 'too-do' box for some time.  Once again painted over a black undercoat and mounted on a 30mm round base. 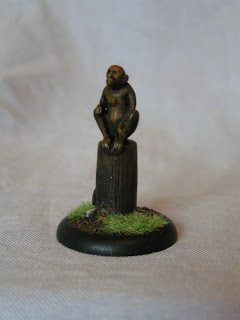 Photo Four - The standing stone.  Following an earlier post where I had based a simple stone from the garden on a Milliput base my Wife found this small strip of slate and asked me if I wanted it.  The stone is a simple slate off-cut superglued to a 40mm round base and the groundwork built up with Milliput then textured with sieved stones and fine sand. The stone stands 65mm tall.

This particular image reminds me of a scene from a film! Any ideas which one? 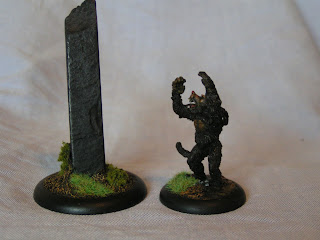 This image also shows the finished and flocked Vultan base - something that was missing from the earlier post. 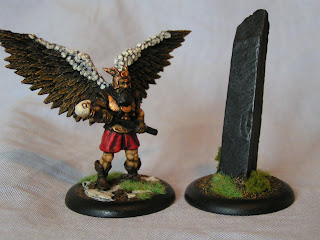 Very fun! They look great.
I was thinking of getting a pack of baboons to for my 'Belgian Liberation Army' to counter the German werewolf player's wolf pack in our campaign and these might be just right!

Nice muted colors...looks like they are cruising through the dark of the jungle.