In part one, I gave some background to this long stalled conversion/modelling project however with my re-kindled interest in 40mm Flash Gordon I thought it was time that I started work on my Molemen.

Photo One - A metal miniature from the Reaper Dark Heaven/Legends range.  GarravanK the Ghoul King (number 03388) bought from e-bay.  The miniature stands 36mm tall (head to toe) and is quite a hefty lump of lead. 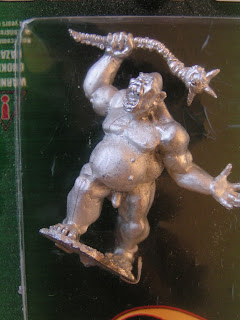 Photo Two - After a long e-bay search I came across this HeroClix miniature URSA MAJOR (102) - A huge brown Bear with enormous claws that I thought would be ideal for this conversion. This figure stands over 50mm tall. 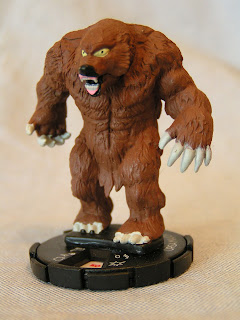 Photo Three - The first part of the conversion.  I have cut both hands off the Reaper Miniature and attached the claws from the Ursa Major bear figure.  Both claws have been pinned and superglued in place.

I have not attempted any major animation, preferring to keep the pose the same. The base is a 40mm 'premium round' base with the groundwork built up from broken cork and Milliput. I have also added a layer of 1mm plastic card under the figures metal base to raise the height of the model.

At this moment there is no fine or detailed sculpting, just some Milliput around the joins between the metal arms and the plastic claws.  I intend refining the sculpting once these initial conversions have fully set. 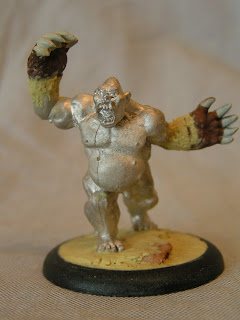 In part three, I will detail some of the refined sculpting - this figure still looks like a ghoul with huge hands while I am trying for something more akin to the Wyrd Miniatures Molemen see in part one.

If I ever get around to modelling the other two Molemen I will have to animate the base GarravanK miniature a little more.

Great job putting the two figures together that way.