The 40mm Jim Bowen/Cliffhanger miniatures that started this fascination have a group of four Molemen (see earlier posts) but for some reason they have never appealed to me and I have been searching out suitable proxy figures to model/sculpt and paint.

This image shows some Molemen sitting astride a jet-cycle and firing their acetylene guns. In fact I believe these creatures are a group of adversaries for Superman and not Flash Gordon. 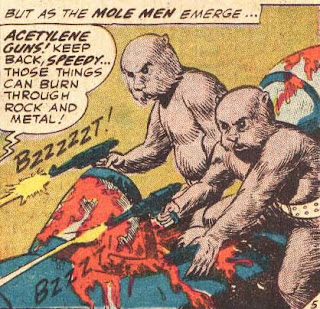 Previous posts have detailed my plans - so far fruitless plans for a group of three Molemen. I originally looked at the Cliffhanger Molemen, but they were too simple, too cartoon like. I then looked at these Wyrd Miniatures Molemen, but after purchasing them realised that they were way to small to sit alongside my 40mm collection and so I sold them on and it was 'back to the drawing board'.

This time I am determined to see it through and rather than set myself an unachievable goal I intend to convert/sculpt just one test model and then looking to increase this group to three at some possible later date.

In part two I intend giving some more background and detailing the donor models used.

Finally for this post, I thought I would tempt readers and particularly the loyal bunch of Flash Gordon followers with a list of still un-modelled Flash Gordon characters and creatures that I have plans to add to this collection at some future date;
Fire People
Panthermen
Tuskmen
Droks
Horn-Snakes
Horn-Horses
Ice-Bears
Squirlons
Octosaks/Octopoids
Tigrons
Wolverons

Images used without permission to illustrate text and context.
Posted by Tony at 12:10

I love your Flash Gordon project and am thinking of having a bash at it in 15mm scale.

You mention the People of Mongo and Creatures of Mongo, is it a book or can I find it online?

I have a fair few of the Alex Raymond collections so theres plenty to get me started but it would be handy to have a sourcebook covering everything!

Most of the information can be found at;
http://flashgordon.wikia.com/wiki/Category:Creatures_of_Mongo

There are lists of Creatures, People of Mongo and even Characters of Mongo.