Earlier this month I was sorting through some boxes in the attic and came across a box file of Harbinger Magazines. A full set of all 25 paper published magazines.

When Harbinger first came out in August 2003 it really was a 'breath of fresh air' in a market that was truly dominated by Games Workshop.  I eagerly picked up my copy from W H Smiths and within two or three issues decided to subscribe.  In the very early days there were special limited edition miniatures offered to early subscribers - miniatures that I still have to this day.

At just £3.50 per issue I read each from front-to-back and absorbed the articles and review with some relish. 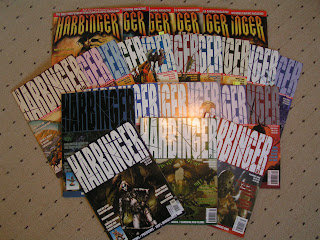 Later I allowed my subscription to lapse, but as you can see I still supported the publication, right up until issue 25. The last paper published magazine (2005).  I am aware that there was at least one On-Line edition which was available via www.harbingermagazine.com although recent attempts to access this site have been unsuccessful.

The main reason for this post was to have a look-back at this publication and try to assess what it was that called to me when this magazine was originally launched.

I spent a week or two reading the articles and reviews and in truth was a little disappoint. It could be that this magazine 'was of an age' and has not lasted as well as others, but I found the articles to be less enjoyable than I had expected or remembered.  I am not suggesting that I will sell-on my collection. I think I am too sentimentally attached to the memory of the earlier editions and looking back through 'rose-tinted' glasses am a little blinkered.  I find that earlier White Dwarf's still hold some fascination while Harbinger is just a reference read and a look back at what-was.

I would be interested to read what others think of this now long gone magazine and if they like me find the memory of the writing greater than the fact?

For anyone not familiar with the magazine I would suggest that you pick one or two up (there are a number available via e-bay) and have a read. They are fun, informative and give a very good overview of what game designers and figure manufacturers were working on back then.

Finally I long for a truly independent fantasy miniature/gaming magazine, but I also think this role has now been taken over by the Internet, suppliers web pages and forums.  How I long for holding a paper edition of these electronic magazines - but as time moves on I firmly believe that the electronic Web based magazine, Blog and Forum is the real way forward. I may not like it, but I doubt if there really is room or a market for such a paper based publication today.

Yeah, I had some of these. A lot of the games in them are completely non-existent and were so independent, it's almost impossible to use the scenarios...

It's strange looking back at them, I remember loving them too. But there we go!

I have mixed views on Harbinger as on the one hand I bought it as it was an independent miniatures magazine specialising in scifi and fantasy at a time there were non but White Dwarf (I had hoped it would be a replacement for the old Arcane Magazine) but the design and layout, especially in the earlier issues were a bit poor.

I remember having difficulty reading some of them as the text colour was too similar to the background.

I also subscribed and was very disappointed when they ceased publication and took 10 months of my subscription money with them without even an apology.

Needless to say I am now leery of subscribing to any wargames magazine!

Saying that the miniatures they produced were really nice and I still have a few kicking around somewhere!

I had all of these as well. I enjoyed the magazine but it was the special edition Harbinger mini's that attracted me. Having said that I did the usual gamer thing and never got round to painting them! They are still somewhere in my Lead Mountain awaiting that first lick of paint...

I thought Darker Horizons, the MW spin off was rather good last week

I came in late to getting into Harbinger. I ran into their booth at Gencon and bought a copy of all their magazines and a subscription. Like Lt Brittan, I got screwed when the stopped, but I was only shorted 3.

I do remember liking some of the painting articles and the terrain articles and LOVED the whole Demon from sculpt to vulcanized mold series of articles.

Harbinger was a fun ride. I had all the print issues and multiples of a few that they double shipped. The minis that came with them were good to excellent. I have painted a few and passed the rest along. Unfortunately, most of my Harbingers and many other 'zines were lost in a flood. A couple of the duplicates survived in my "box of stuff to lug to conventions to barter with". I've held on to those and give 'em a look every now and again. Has it really been that long since they folded? Nah, couldn't be :(