I have already written about how I have been looking forward with much anticipation to the launch of the new look Miniature Wargames with Battlegames and not just because there is an article written by me! Over the last couple of months, I have read that with issue 361, Miniature Wargames is to be re-vamped with a new Editor, a new visual style and the inclusion of Battlegames. On Saturday morning, I popped down to WHSmiths and scanned the shelves for the magazine, initially disappointed as I could not find it among the usual gaming publications, I soon spotted it and using my WHSmiths voucher (a birthday present from Mum - thanks Mum) I eagerly picked up a copy.

The contents are just as impressive, although I will state now that on first browsing the pages I was not immediately 'grabbed' by any one of the articles - OK I lie, there was one.....

However upon settling down to properly read the magazine, it was obvious that there was quite a lot of articles and content that both caught my attention and made me think, "I could use that idea in my own games." It is very apparent that the new Editor is on an evangelical crusade to make Wargaming more fun and the interchanging of different ideas and gaming mechanics a regular occurrence.

I have still to read every article, but so far have been pleasantly surprised by the writing and the exchange of ideas. It is also great to see Mike Siggins once again pontificating on gaming with 'Thoughts from an Armchair' being required reading for all gamers. 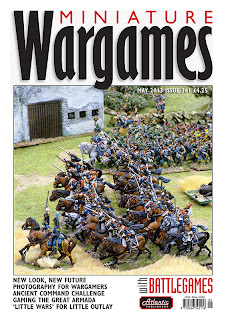 The article on photographing miniatures - 'Digital Photography for Wargamers' by the Editor was full of useful tips and advice, while the look-back at 'Little Wars, for little money in little space' was a real eye-opener, this may become a little side project for the rest of the year. Similarly 'Send Three and Fourpence' made me both smile and think of my own Lead Mountain!

My own contribution to this newly formatted magazine was a short piece of modelling called 'A Saladin for UNIT'. The original article was both conceived and written after a couple of e-mails with Andrew (the previous editor) who was looking for suitable content for a planned launch issue of Darker Horizons. The magazine never materialised, but the Dr Who themed article has found its way into this land-mark issue.

These images show the finished model on a custom-built display base with 40mm Graven Images Commandos. It is somewhat fitting that in the month when Jim Bowen has passed away, there is an article in the re-launched Miniature Wargames featuring some of his figure sculpts. 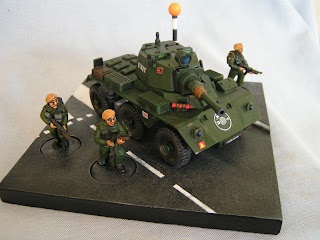 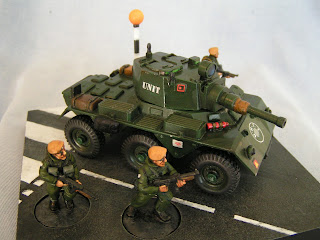 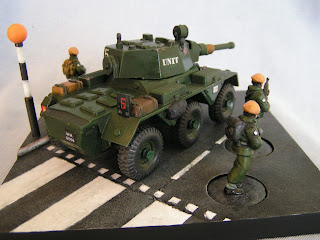 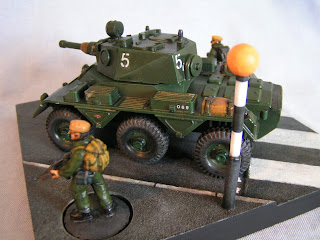 Finally, I think the new look Miniature Wargames with Battlegames has succeeded in moving the thirty year old title forward, while maintaining the core themes, the new look is easier to read, full of cross-over ideas and definitely new. I look forward to more of the same.

Big Lee at BLMA has posted this short review;
http://www.blmablog.com/2013/04/miniature-wargames-with-battlegames.html