The Pledge or On-Line Build for April 2013 is an Olive Press. The model is based on this images which I have taken from the Internet, a simple donkey worked stone Olive Press which I believe is situated in a cave in Bethlehem.

I have wanted to include this tutorial for some time and was prompted into doing so by a similar article published in Battlegames, in fact the last Battlegames prior to being amalgamated into the new Miniature Wargames/Battlegames due later this month.

It is not a new model, the construction having been completed well over a year ago. However I had never got around to painting it and this will be a step-by-step construction and painting tutorial. 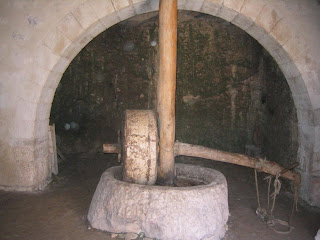 For anyone not familiar with 'The Pledge'. This was my attempt to get through some of my Lead Mountain by painting up some miniatures, a group or model per month. For more details see this link. In 2013, I have tried to continue this promise and so far have completed;

I find this simple mechanic a great way of reporting progress on my projects every month and would recommend it as a way to reduce your own Lead Mountain and keep a journal of your work.