Part Two of this months On-Line Build, jumps straight to the fully painted, varnished and flocked stage as the work-in-progress shots were lost when my computer played up......................

Photo One - The 'Wee Little Beasties', all four of the mad little buggers. I have tried to vary the colour scheme on each of them, to give some variety and also identify different sub-species of Mad Aggis. 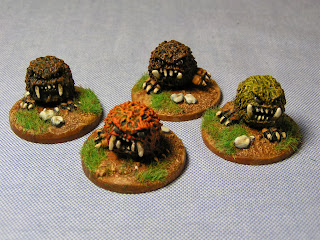 Photo Two - Broone and Ginger, reputedly the most fierce of the bunch. 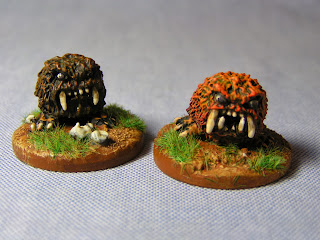 Photo Three - Darge and Blondie. There are those that say Blondie is a girl, but as no one is willing to check, we will have to take this with a 'pinch of salt'. 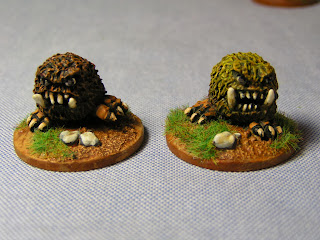 Each War Haggis was mounted on to a 2p coin with the groundwork built up with Milliput. they were all painted over a Black undercoat and once the main fur colour had been applied, I used Citadel Washes to build up the depth. Detail painting was done with a No2 Rosemary & Co brush (my current brush of choice).

Part one - Joccian War Haggis for Flintloque can be found by following this link.

War Haggis...that concept is warped genius or I'm a ferret!

They are hugely entertaining and I love the fact that they are different colours - superb!

I'm a big fan of Rosemary & Co. brushes too. Curious what series you use. Thanks!

I use Series 401 (size 2 and 3). I prefer the long handle option rather than the short handle.

fantastic - they brought a smile to my face (and that don't happen enough - according to the wife)!
585 ereduub

I will have to get myself some of these, and I have been eyeing the Rosemary and co. Brushes for a long time now... Now you have said that you use them, I will have to jump on the bandwagon!!!

Thanks again, keep it up!
Rob