Sherlock Holmes and the Hentzau Affair 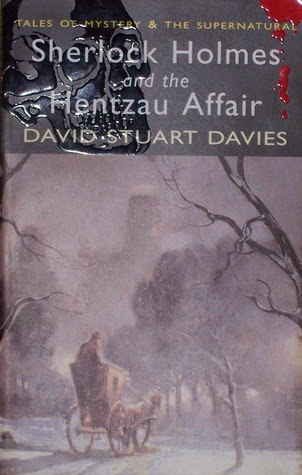 Last weekend I watched the Stewart Granger film, The Prisoner of Zenda (1952). It was being screened on one of the TV channels as an afternoon matinee.

When it finished I remembered that I had picked up a short story from one of the discount book stores - Sherlock Holmes and the Hentzau Affair by David Stuart Davies. The story is a fusion of a Sherlock Holmes mystery and the skulduggery of the Anthony Hope's novel The Prisoner of Zenda. This is only a short book, 128 pages and I was through it in a flash and enjoyed both the story and the style of writing.

Most people will be familiar with the story of The Prisoner of Zenda, either the book or one of the many films. Before I go on, I will say how much I enjoyed the 1952 film version. A traditionally worked film, that had a great story and good acting. If only modern films were as well thought through! The book moves the story on four years when Prince Rupert is ill and Count Hentzau is once again looking to take over the throne.

As stated, a great short story and well worth the discount price of just £1.00. (I am sure that I picked it up from Poundland).

Sherlock Holmes and the Hentzau Affair by David Stuart Davies
Publishes as part of a series of short story called Tales of Mystery and Supernatural by Wordsworth
www.wordsworth-editions.com
ISBN 978-1-84022-548-8
Available from a number of retailers, but this review might help.

I might look this book up for a read thanks for your report. I also love black & White movies