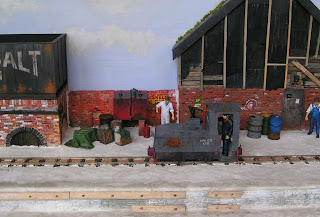 The first items of clutter added to the layout were the large oil storage container and some greenery modelled from artificial hanging basket material as seen in the image below while the image above was me placing items to see how they interacted with one another. I had great fun moving items around until I had found what I thought was the perfect position.

The low wall (in the centre) has been glued in place with a corrugated cardboard spacer to move it forward, away from the back scene and the groundwork built up from DAS modelling clay. 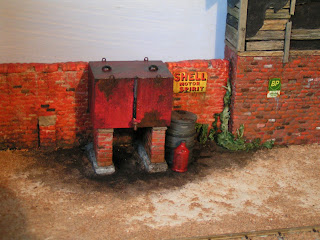 I mounted the oil tank onto concrete supports made from plastic card as I though it looked a little too low. For details of how the oil tank was built and painted see this Blog post. These supports were glued in place first and the ground cover painted with a mix of dark brown and black which was both washed over the DAS and later touched-in with a more opaque mix of the same colours. I superglued the oil tank in place and then added the grey oil barrel and the red oil container (to add some much needed 'colour' to the scene).

The hanging basket material was first superglued and then coated with PVA glue to hold it in place. I will be adding more greenery later.

The first items of clutter certainly help to fill in the large blank areas of the layout. More to come and soon.

That area around and under the fuel/oil tank evaporates even the smell of oil drenched earth I know from days past just from the look of it! Great work Tony.