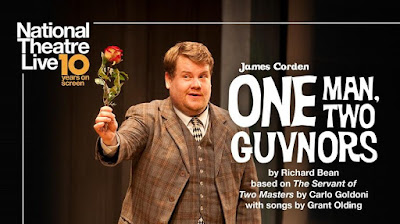 Last night, Sue and I visited The Vue cinema, Worcester to see the play One Man, Two Guvnors which was being shown as part of the National Theatre Live 10 year anniversary.

The evening started with a hand made pizza and a glass of wine in Sugo's and then on to the cinema for a rather novel experience - a play performance on screen in a multi-plex cinema.

The play is just fantastic, a real 'slap-stick' comedy with quick witted lines, superb 'one-liners' and pithy references as well as ad-libbing of the highest order and even audience participation. The result was a laugh-out-loud performance that had me laughing so hard, that I had tears rolling down my cheeks. A great night out.

James Corden led the cast and was first class as Francis Hensall - the two-time employed butler/minder to two guvnors. The play is a re-writing of a much earlier play called The Servant of Two Masters by Carlo Goldoni which has been masterfully re-done in a 1960's Brighton setting by Grant Olding with intermission and added 'Skiffle' band music from a four-piece skiffle group (just like the one my father used to perform in back in the day). For more information see this link.