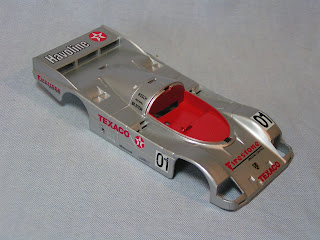 Lockdown just got weird.....
Now that I've done all of the jobs that needed doing in the garden, tidied my shed and even arranged my magazine and book collection, I could put it off no longer - I started to tidy the garage. I'm sure like many my garage is a glorified dumping ground and has never been home to any car. My garage is pretty much crammed full of old furniture, tools that I will never use, old junk and cardboard boxes. One cardboard box (actually two large cardboard boxes tucked away in the corner and full of cobwebs) held my sons old Scalextric racing car set. The track was rusted and none of the cars would run but we do have loads of track and about six cars in various states of decay. These cars have not been used for over twenty years!
I took out the two Porsche 962's and though I would try to get them to work. Some time later I had the engines running but the tyres were completely shot having decayed and cracked. Before I try ordering new ones from e-bay, I thought I would try renovating the bodies and taking inspiration from the internet and the Games Workshops Dark Future car wars game I started to add guns and armour to the red Porsche. 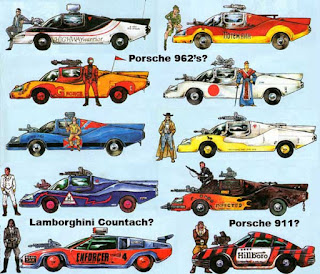 Car No. 1 was modified as a Police Interceptor with linked machine guns to the front and a police light bar mounted to the roof. All the 'bits' came from my well stocked bits box and were glued in place with superglue. 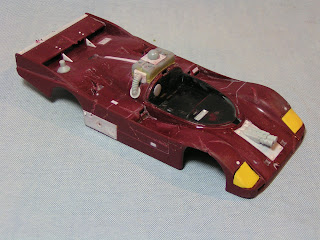 As you can see there was very little in the way of modification/customisation, but I was pleased with the look and enjoyed the project which took less than a day to get to this stage. Dents and scratches were added with my Dremel set on high speed and at the same time the stripped-down chassis was given a thorough clean. 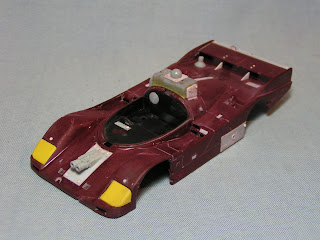 Now, I just need to paint it.
There are loads of sites on the internet showing how others have modified their own Post Apocalyptic vehicles and some, for example the board game Gaslands from Osprey show how Matchbox and Hotwheel cars can be modified with new wheels, armour and guns as well as outlandish paint schemes to produce unique playing pieces. I have not seen anyone do this with Scalextric slot cars, but there's no reason I can thick of not to try.
Part two will show how I painted this 1:32nd scale model.