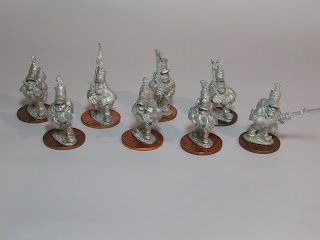 Prior to basing the miniatures, I had to do some remedial work on the castings, particularly the rifles. I used my fingers and some slight pressure to straighten the barrels before repairing the broken bayonets.

All eight figures had their bases smoothed out by sanding back the bottom of the metal base with some sanding sticks (wooden sticks with sandpaper/abrasive paper stuck in place with double-sided sellotape).

The figures were glued to 2p coins with more superglue and accelerator. I use a brand of superglue called Mitrefast from Everbuild which can be purchased via the internet.

I am well aware that there are a wide variety of different basing techniques/materials used by Flintloque gamers. I have persisted in the use of 2p coins since my first Flintloque Orcs were modelled over twenty years ago. By the way, my first Flintloque minis were purchased from a now long-gone ironmongers/model shop in Stratford-upon-Avon.

Bases I have seen used on Flintloque miniatures;

1 - Coins (as already stated, I use UK 2p coins or 1p coins on some of the smaller figures)

3 - Square metal bases (as supplied by Alternative Armies). These were the bases included with this box set of Flintloque Line Infantry

4 - Square plastic bases (similar to the Games Workshop bases, but without the 'Slotta-base')

5 - Round plastic bases, either simple or with a curved lip

7 - Resin 'cartouche' bases, either round, square or rectangular as supplied by AA

So which bases do you employ?

I'm currently using the round lipped bases for my Flintloque stuff as I quite like the look of them but was tempted to use 25mm square bases on the off chance I ever painted enough to play Slaughterloo.

Fortunately I regained my sanity and realised at my painting speed, it would take a year to paint enough for a single unit!

I remember basing my first lot of Flintloque figures using a stack of the old British Half Pennies that my dad gave me though and If I still had enough of them, I'd probably use them again for retro completeness!

Looking forward to you painting the little guys though. Have you had any thought on what colours you're going to use yet?

I use 2p's too, but before starting with them again I made sure I could get movement trays for my troops so I could use them in either Ranke & Vyle or Slaughterloo. Looking forward to following the progress of these fine fellows Tony!