Flintloque Dwarf Landwehr with a twist 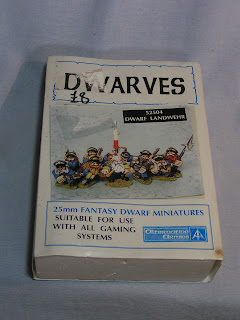 My latest Flintloque On-Line Build will be a group of eight Dwarf Landwehr (52504). However they will all be converted..... 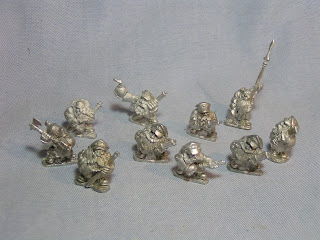 The standard box set has been on my to-do list for some time (read that as years) and are real miniature antiques being bought from Beatties, Bristol which closed nearly twenty years ago.....

But there is a twist.

Earlier this year I read a magazine article which featured an artist called Jakub Rozalski (AKA Mr. Werewolf) and in particular the series of painting in the Wolfpack 1863 series showing images of cold and frozen Landwehr facing huge and fierce werewolves which have inspired me to paint up my Dwarf Landwehr in the same uniforms. For more information, see this link or the official Rozalski site here. There is also a Twitter account for the artist which can be found here. As you can see there is an awful lot of information and images about this prolific artist.

My plan is two-fold;

I'll be converting my Flintloque Landwehr with modified headgear and then painting them in the drab grey brown uniforms shown in the illustrations. Later I plan to model a large werewolf miniature and hopefully have a small skirmish game - Dwarf Landwehr against a Monsterous Werewolf. Without getting too ambitious, I would also like to build a gaming board, a themed gaming board showing the same terrain features painted by Jakub to fight over. This is NOT a 'quick fix' modelling exercise but something that should keep me interested and inspired for some time to come.

Stay tuned for more updates, but be warned this may take some time. Jakub Rozalski and his fantastic Wolfpack 1863 illustrations have given me loads of inspiration for future modelling and gaming ideas.