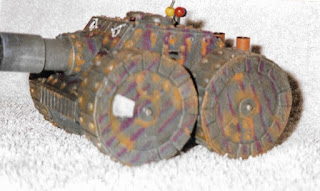 Today's post is a real 'blast-from-the-past'. A scratch built Orc 40k Gobsmasha that was built nearly thirty years ago using plans included in an old White Dwarf magazine. The model was built during a holiday at my Mother-in-Laws and uses bits and pieces found around the house. The finished model was featured as a showcase model in the old Swansea Models and Hobbies store, Swansea. 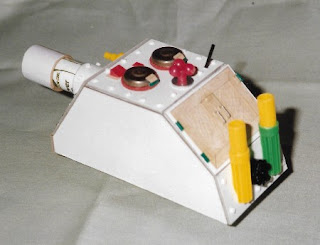 The core construction was some thick card, which had been 'layered' with more card to give a strong basis on which to add detailing. 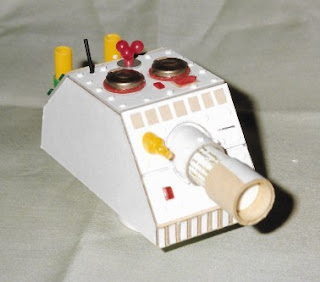 Some of the scrap material used includes, Christmas decorations, pen barrels and tops, a Pritt glue stick for the gun barrel and rivets sliced from artificial flower stems. 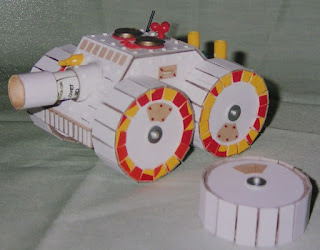 The wheels were cut from beer mats and covered with more card and detailed with more cut up beer mat card and some spare washers. 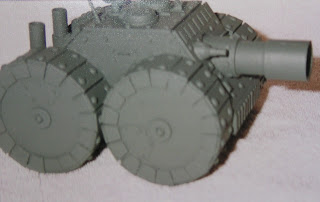 The model was undercoated with grey primer (a rattle can spray paint) and the treads on the wheels are lentils/split peas, stuck in place with PVA glue. 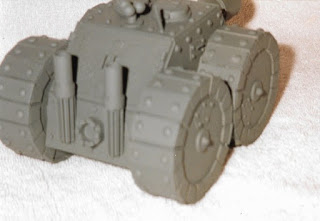 The whole model was 'textured' by splattering the tank with watered-down Milliput epoxy putty which gave the model a solid base for painting and added some subtle interest to the basic and plain panels. 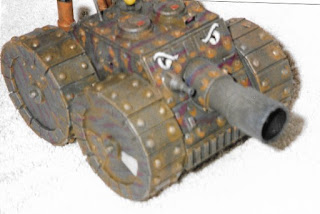 Painting went a little haywire; tiger stripes and lots of rust. I particularly liked the eyes painted on the front. 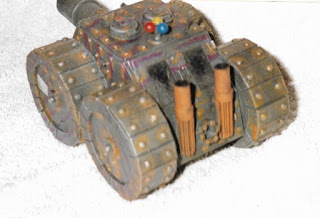 The exhausts were painted in a basic rust colour and the exhaust staining was drybrushed black.

Some time after it was on display in Swansea Models and Hobbies, it was returned to me and I thought I had placed it in the attic. I am sorry to say that I no longer know where it is. But at least I have these images, which were found when I was searching through some old photographs earlier this week.

I hope you like the Gobsmasha - it was great fun to build and paint.

What a fun project, and the watered down miliput is a good tip.

And you are right, the eyes are a great touch.

Fantastic! Really great and very sad you don't have it any more.