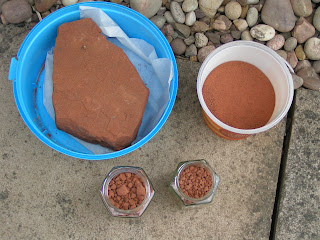 When I built my first narrow gauge railway layout many, many years ago I used real soil from the garden - dried and sieved to add a more natural ground cover effect. With The Yellow Pelican layout I wanted to do the same and searched for a suitable red soil material.

I have used real red sandstone, found in Kidderminster (a natural rock outcrop at the side of the road) as the basis of this mix (see rock to the upper left). 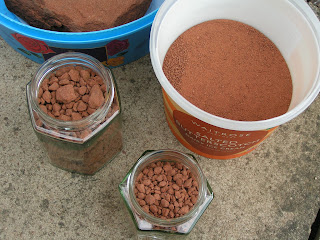 The rock was crushed with a hammer and then sieved with a variety of different sized sieves to produce three different sizes of natural red ground cover; a very fine almost powder mix, a small rock size and some larger random rocks as seen above. 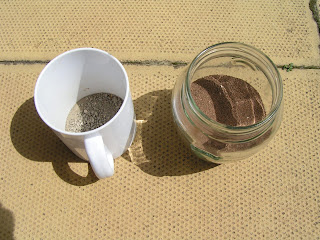 In addition I did the same with cat litter (on the left) and a lump of clay soil found in my own garden (on the right) these would be added to the red sandstone to vary the intensity of the red soil and add some natural variety. 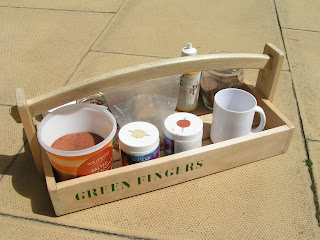 Using all three coloured mixes and varying the grades of the sieved stones, I had a soil colour palette with which I could proceed. (This image also shows two of the three sample pots, I used to paint the layout). 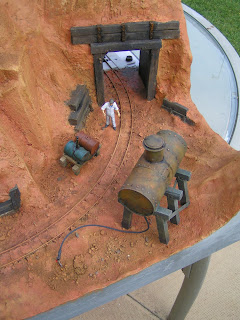 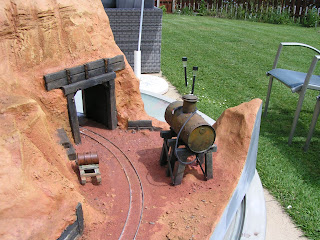 The final image shows how the legs of the water tank and oil drum support have been modified to fit the ground contours then glued in place and how the fine sieved sandstone has been added.
The sandstone was applied over slightly diluted PVA glue and then sealed with highly diluted PVA glue which has been 'wetted-down' by mixing in some washing up liquid and dripped on with a pipette.
Now that the sandstone has dried, you can see how it matches-in with the earlier painted and drybrushed ground cover colour. I now have the job of adding this sandstone/clay mix to the rest of the layout, but hopefully as the weather is forecast to be good over the next couple of days this should be done very soon.
Tony
Posted by Tony at 01:27

That mix turned out perfect. The variation provided by the cat litter and bits of clay is very
nice and natural.

I agree, it turned out nice.