Earlier today I drove up to Telford - The International centre and to the IPMS (International Plastic Modelling Society) model show, Scale ModelWorld 2010. This is the fourth year I have attended and regular followers and readers will know how much I rate this particular show, quite possibly the best model show in the world! A big claim - but one that I am quite happy to defend.
With over 200 photos on my new memory card, I have loads of information and inspiration for this Blog. To begin with, I'll start by saying that the £9.00 entry fee although a little high was worth every penny, four and a half hours after entering I was heading back with a bag full of goodies.
Photo One - A haul of over sixteen magazines as well as catalogues and leaflets, total cost, less than £5.00, and no this is not a typing error, all this for less than £5.00. (Actually, I think it was less than £3.00, but I didn't want to boast). 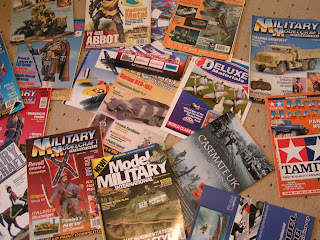 Photo Two - The IPMS operate a transfer (decal) exchange. I spoke with the member who was manning the stand and explained that I regularly produce Fantasy, Victorian Science Fiction and Sci-Fi models and am always on the look-out for suitable and unusual transfers. This bunch of used transfer was given to me for free, again, no typing error - totally free. At this stage I was so embarrassed that I found a British Legion Poppy tin and made a donation! 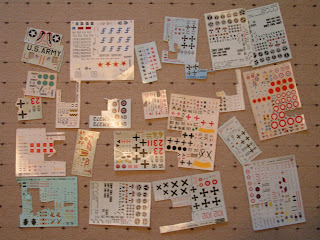 Photo Three - Shows the bulk of my purchases, all ten wooden bases cost just £1.00, the large bag of static grass was reduced to £2.00 and the Focker DVII was £3.00. I don't want to gain a reputation for being a skin-flint, but these are just some of the great bargains you have missed out on. 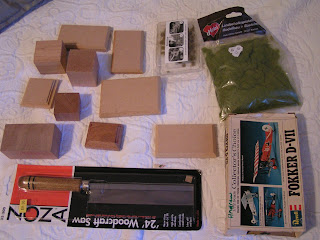 Due to changes in personal circumstances, I am aware that this may be my last Modelling/Wargame Show for some time and I made the most of it and really, really enjoyed myself, a total indulgence. More posts to follow and loads more photos.
Tony
Posted by Tony at 08:31