The Del Prado model arrived yesterday morning. I was surprised to see how tall it is as I had expected it to be 54mm, but it is closer to 62/63mm (head to toe). The example I purchased via e-bay cost me £3.00, as you can see it was brand new and still in it's packaging, which was a good thing as the metal is quite soft, the rifle and particularly the bayonet are very easily bent. 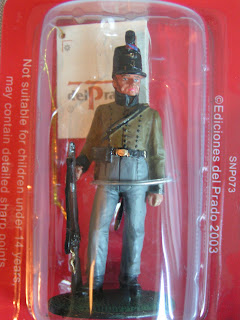 This photo shows the model removed from the packaging, quite an imposing stance. I like it! 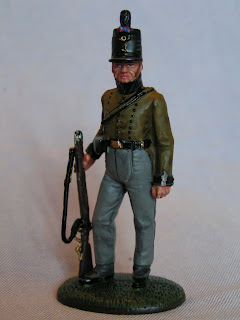 Photo three shows the conversion work. I have used Milliput Grey/Green and Green Stuff to build up the shako and shoulder decoration, while the lace-work to the front of the jacket is 100% Green Stuff.
I have added sideburns and a moustache as shown on the Victrix 28mm models featured in Wargames Illustrated. I think it gives the figure some character. 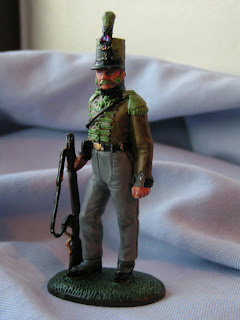 I would think that this same miniature could be converted to a British 95th Rifles with little trouble, the cut of the uniform being very similar.
The model has been 'cooked' in the oven (to set the Milliput and Green Stuff) and undercoated, but this can wait until the next update.
Tony
Posted by Tony at 00:57