Barking Irons Online is featuring a three part Flintloque Halloween Campaign written by me and called Getting Ahead  The initial idea and story was intended to be a short story and featuring on BIO as one of The White Liar stories. However as the idea developed it became obvious that this simple short story could be expanded into both a longer tale and three linked gaming scenarios.

Craig Andrews had spent some considerable time honing my initial scribbling and produced a quite horrific background story and gaming scenarios the first part of which is featured on Barking Irons Online (see link above). Craig will be publishing the following two instalments over the next couple of days.

The story thread was first penned back in March of this year but as it developed both Craig and I decided that the ideal time for publication was Halloween - The First Barking Irons Halloween Special. I hope you enjoy part one. 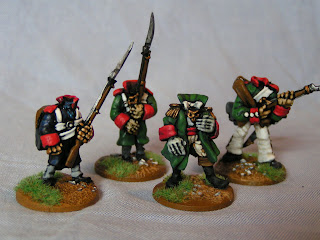 To illustrate the story I produced these Headless Zombies - Flintloque/Deadloque miniatures that have been converted based and painted.  More to follow.

Given the length of time from start-to-finish on this project it is great to finally see it published. I hope that you enjoy reading part one.

Nice painted figures, with a good choice of the colors!

Agree with Peter, and good simple conversions too.