Progress is painfully slow as the cold weather curtails visits to the shed-at-the-bottom-of-the-garden.

Photo One - To the left is the unidentified robot, standing about 42mm from sole of the feet to top of shoulders. It did have a rivet-shaped head, but I cut this off and then lost the images!

On the right is a Sky Elf from Wargames Foundry - part of their Elf Revenant range - REV 400 Aurelion in Silence Stronger. I have a couple of these metal castings as I bought them at a wargame show some years ago with the intention to model some additional Hawkmen. The figures wings have already been used on this project.

Details of the original miniature can be found here. 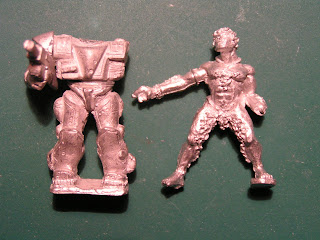 Photo Two - The Sky Elf head has been removed then pinned and glued to the robot body. I have also pinned and glued the armoured left arm in place. Looking for all the world like a Marine from Space? I think the conversion is working well so far. 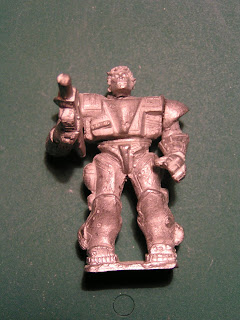 My next task is to mount the figure on a 40mm roll-topped plastic base and build up the groundwork.