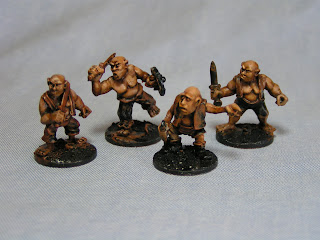 My usual technique for painting figures is to concentrate on the flesh areas first. These Boche Halflinga are no exception.

I have used the same flesh colour formula as the earlier post, so won't repeat it here. Basically work from dark to light and add washes during the process.

Image Two - Shows the trousers painted and once again the technique is the same as the earlier post, the main primary colour first, then a highlight and the white stripes applied over Stonewall Grey from Vallejo. 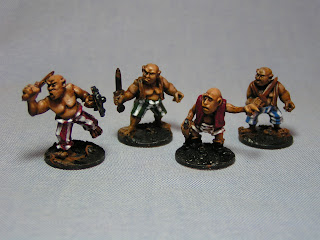 Image Three - The Davy (the figure that is in the front of this group) has the letter 'R' embroidered on the back of his waistcoat. In my Boche group 'Rodders' is DelBoys brother and as DelBoy has a bl**dy big chain around his neck with a gold 'D' Rodders had Cassandra to embroider the 'R' on his waistcoat!

It reminds me of Ridell High from the film Grease! 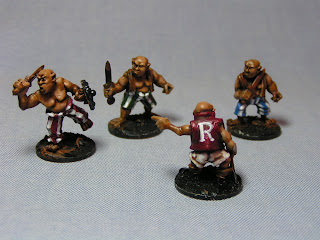 The second group is progressing well and working on small groups makes the painting less of a chore and the progress move along quickly..