Who let the Dags out - part two 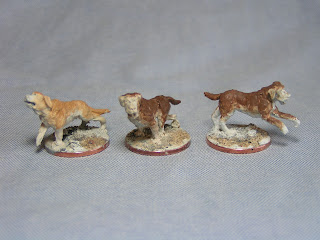 In a change from the norm, I undercoated the three Mastiffs White rather than my usual Black. This allowed me to use watered-down acrylic paint to build up the distinctive coats of these dogs,

Image Two - The dogs were easy to paint, just follow illustrations and images from the Net and you can't go wrong. The Black mouths, ears and heads were painted with a very dark Grey once again following illustrations found after a Google Search.

I have painted the bases in the Darker Brown that I use for these Pax Bochemannica miniatures and after picking out the odd stone in Grey (mixed from Chaos Black and Skull White) I varnished the figures with both Gloss and Matt Varnish. 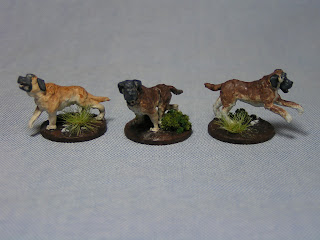 The bases have been further decorated with static grass, static grass tufts and ground foam, all held in place with small dabs of superglue.

Image Three - Here you see the three Warlord Games Mastiffs alongside a Pax Boche Halfling. I think they work well together. 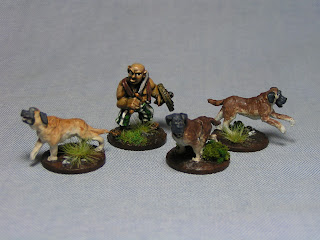 Very nice! I like how you went from a light to dark on the dogs. Very well done.

Really nice work! Good idea on bulking the legs out, you are right, they are a bit flimsy.