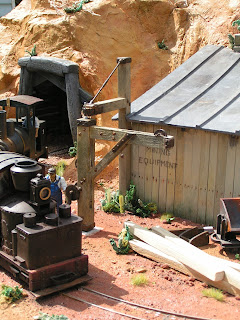 When I initially discussed building the layout with my grandchildren, one of the features that they asked for was a crane and one that could move. I had looked at building a larger version, based on the underground crane found at The Bath Stone Quarry, but later realised that I didn't have enough room for such a monster. In the end, I built this wooden crane based on an illustration I found on the internet. 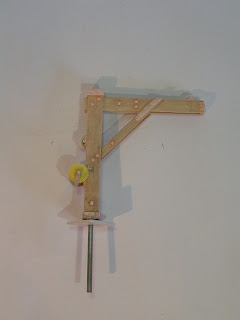 The main construction was from wood, strip wood that I had in stock, some plastic card details and a metal post from a Meccano set. 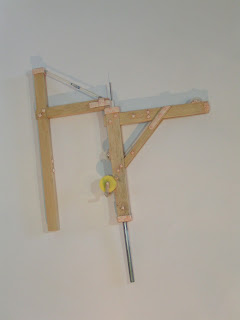 To support the crane, I had to do a bit of reverse engineering and built a wooden post to attach to the edge of the lower loading bay. Obviously it needed to pivot and this was done with a short metal peg inserted in the top of the crane post. 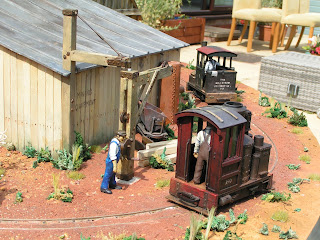 I trimmed away the roof area of the building to the front of the layout and slotted the support post in place, while I worked out where the lower, main pivot post would go - a matter of measure twice (actually measure about six times) before drilling the hole in the layout. The crane is mounted on to a concrete base modelled from plastic card and the post goes down below the level of the baseboard into a wooden plug glued below the base. I still have to work out how I will operate the crane remotely, but at least it turns or swivels on the metal post.

You can also see how I have started to add 'clutter' to the layout, something that I will continue to do. 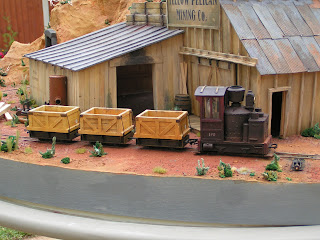 The final image, shows engine 190 on the layout prior to attaching the crane to show how the crane is positioned.